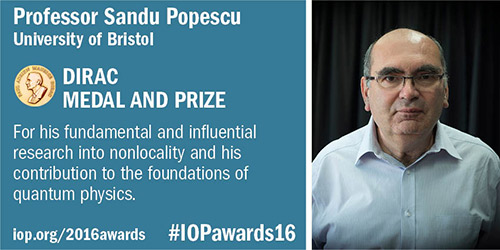 The Institute of Physics (IOP) has awarded the Dirac medal to Professor Sandu Popescu for his contribution to quantum physics, recognising his work to further the understanding of quantum physics and his research into nonlocality.

Professor Popescu has made seminal contributions to quantum information and computation, and quantum thermodynamics; notably his scheme for quantum teleportation and developing the smallest possible refrigerator.

President of the IOP, Professor Roy Sambles, said: “Professor Sandu Popescu’s research has pushed the boundaries of our current utilisation and understanding of quantum processes, with his work involving quantum teleportation in particular set to inspire and motivate generations of physicists to come. I look forward to following his work as he continues to advance the field of quantum communications in the coming years.”

The Dirac medal is one of four gold medals awarded annually by the IOP which, after the Issac Newton Medal, are the most prestigious of all of the medals awarded by the Institute.

The Institute of Physics

The Institute of Physics is a leading scientific society. It is a charitable organisation with a worldwide membership of more than 50,000, working together to advance physics education, research and application. The Dirac medal is named after Paul Dirac, a British theoretical physicist who made significant contributions to quantum mechanics. The medal was introduced in 1985, shortly after his death. The IOP awards a number of medals each year to physicists who are exceptional in their field of research, industry, education or outreach.