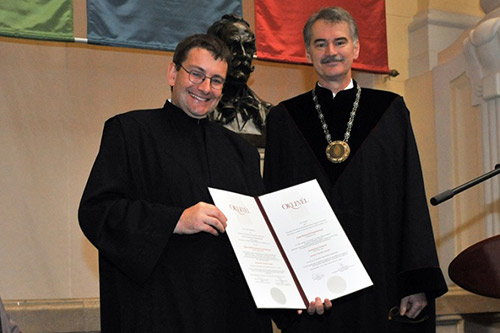 Alan Champneys, Professor of Applied Nonlinear Mathematics in the Department of Engineering Mathematics at the University of Bristol has been awarded an honorary doctorate from Budapest University of Technology and Economics (BME) in recognition of his internationally reputed activities within the specialised branch of mechanical engineering. The Doctor of Engineering was awarded at a ceremony last weekend [Saturday 28 May].

Founded in 1782, BME is the oldest technological institution in the world having the title of University. It counts among its graduates the mathematician, aerospace engineer and physicist Theodore von Karman and the architect Erno Rubrik, famed for his invention of the Rubik's Cube.

Professor Champneys, a mathematician by background and an expert in nonlinear dynamical systems theory, said: "I am particularly flattered to be awarded an honorary doctorate in Mechanical Engineering, which was partly in recognition of my collaborative work with a number of individuals at BME, especially with Dr Csaba Hős from the Department of Hydrodynamic Systems within the Faculty of Mechanical Engineering. Together we have had great fun in working on the industrially motivated problem of understanding rattling instabilities in pressure relief valves."

Professor Champneys, in his acceptance speech, added: "I have forged a career out of collaboration. Isaac Newton once famously said that if he had seen further than others it was because he had been standing on the shoulders of giants. Instead throughout my career I feel like I have been a small man in a field of giants who are occasionally kind enough to lift me up to their eye level."

Dr Hős and Professor Champneys' results have been published in the industry-specific Journal of Loss Prevention in the Process Industries part-funded by the Engineering and Physical Sciences Research Council (EPSRC) and by Pentair Valves and Controls based in Texas. The work has been presented at several American Petroleum Institute standards meetings. From August this year, Dr Hős will spend a year’s sabbatical at Bristol funded by an EPSRC Impact Acceleration Award to further the industrial impact of this work.

Professor Champneys has also just finished a large review paper with Dr Peter Varkonyi from the Architecture Faculty at BME on the 120-year old so-called Painleve
Paradox, which will appear later this month in the 50th anniversary issue of the IMA
Journal of Applied Mathematics.  According to Professor Champneys the paradox helps explain why it is easy to drag chalk across a blackboard but very hard to push it.

Dr Gyorgy Paal, Head of the Department of Hydrodynamic Systems at BME, said: "We are delighted that our University has bestowed this award on Professor Champneys.  He has been a frequent visitor in our Department and he has also supervised a number of project students at Bristol on an Erasmus link, set up between Professor John Hogan from Bristol and Professor Gabor Stepan from BME. In particular we value highly the international expertise in mathematical modelling and dynamical systems that Professor Champneys has brought to our University."