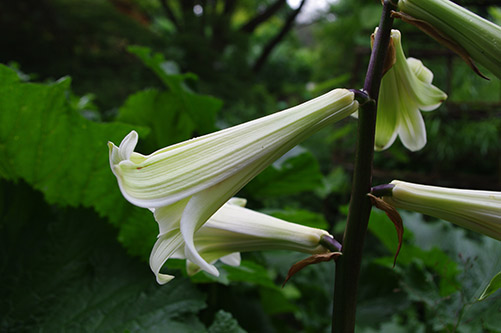 After 12 years of waiting, eight giant Himalayan lilies, Cardiocrinum giganteum, are in full bloom at the University of Bristol Botanic Garden. The horticulturists' hard work has been rewarded with the appearance of between five to seven flowers on the eight plants.

Visitors to the Botanic Garden will have the opportunity for the next seven to ten days to see these unusual plants with hand-sized white trumpet flowers held aloft on vertical spikes, some almost three metres in height. The blooms which are pollinated by moths have a spice enriched scent, intensifying at the end of the day to attract moth pollinators to visit their 20 centimetre long trumpet flowers.

The Garden’s horticulturists are hoping Bristol's own native moth population will be able to pollinate the flowers to ensure a healthy crop of seed, as after flowering this unusual lily dies.

If conditions are right, occasionally the dying bulb will, as a last ditch attempt at survival, produce one or two egg-sized bulbils that can grow on for future years. If they are too dry, this will not happen and all effort will be put into seed production. The Garden's horticulturists are monitoring soil and weather conditions to ensure that seed and bulbils are produced for future years.

Nick Wray, Botanic Garden Curator, said: "This is the first time in over 30 years at the Botanic Garden that I have seen so many Cardiocrinums in flower at once. Their beauty and majesty is adding to the garden that is full of bloom at this time of year.

"I have seen visitors stop in their tracks, mouth open at the sight of such a large and majestic plant unlike anything else found growing in the UK."

In the wild this lily, which is the largest species of any lily is found growing in the Himalayas, China and Myanmar. The original plant came to the Botanic Garden in 1994 from a Cornish garden and nursery. They are not the easiest plants to grow. They do not like strong sunlight or being allowed to dry out during the summer months. Also they are attractive to pests including molluscs and occasionally red lily beetles.

About the Botanic Garden
The Botanic Garden has a strong evolutionary theme and cultivates over 4,500 plant species forming four core collections that illustrate plant evolution, plants from Mediterranean climates, useful plants and rare and threatened native plants to the Bristol area.

Star attractions include an amazing dell demonstrating the evolution of land plants including the dinosaurs' favourite plants: ginkgos, cycads, tree ferns, monkey puzzles and Wolly, the Wollemi Pine.  Other delights include the Chinese and Western herb gardens and an inspiring display of plants illustrating floral diversity.

About the Botanic Garden
The Garden is open from 10 am until 4.30 pm.

Admission is £4.50 adults; free to University staff and retired staff, Friends of the Botanic Garden, students and children under 16.

Teas served from the Devers room in the Holmes will be available on the terrace over Easter, at weekends until the end of May, seven days a week during June, July, August, and September and at weekends in October for garden visitors.

The garden is largely accessible for wheelchairs and mobility scooters with a designated path leading around the garden and glasshouses. Disabled toilet facilities are available on site.

Pre-booked guided tours of the garden for groups of ten upwards are available seven days a week.  Please contact the garden for further information.  There is a charge for the guide.