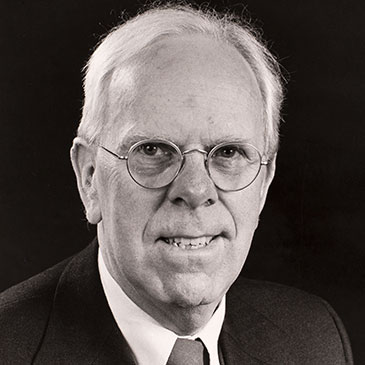 The Reverend Professor Dennis Nineham, Head of the Department of Religion and Theology from 1979 to 1986, has died at the age of 94. His colleague, Dr Sean Gill, offers a tribute.

Dennis was appointed Head of the Department of Religion and Theology at Bristol in 1979. This was regarded as something of a coup for the then Vice-Chancellor, Sir Alec Merrison, for Dennis had already enjoyed a glittering academic career, holding Chairs at both London and Cambridge before becoming Warden of Keble College Oxford. He also arrived at Bristol with a reputation as an able, high-profile and polemical proponent of radical theology. In his commentary on St Mark’s Gospel, and in his more wide-ranging book The Use and Abuse of the Bible, he had argued that the New Testament did not contain historically reliable biographical material on the life and teaching of Jesus, but was almost entirely written by and for people whose pre-scientific thought world was utterly unlike our own.

He further outraged conservative Christian opinion in 1977 by co-editing the bestselling volume of essays, The Myth of God Incarnate. At Bristol he continued to write and argue in the same vein, offering undergraduates a unit with the intriguing and apparently innocuous title ‘Being a Christian in the Tenth Century’, which again emphasised how impenetrably different from our own were the beliefs and practices of Christians in the past. This resulted in his last major work, Christianity Medieval and Modern, published in 1993.

At Bristol he became head of a department which had only been founded 14 years earlier and which contained a potentially volatile mixture of colleagues with widely differing intellectual and denominational perspectives, ages, and personalities. That it remained a creative and harmonious one owed a great deal to Dennis’ warmth, humanity and seemingly endless fund of amusing anecdotes. His experience and kindness were particularly helpful to younger members of staff, a number of whom went on to achieve academic distinction either in Bristol or elsewhere. His gift for friendship and hospitality was fully shared by his wife Ruth, who predeceased him by only a few weeks.

Dennis made one other enduring contribution. The department in 1979 was essentially one that taught Christian studies, with a nod in the direction of what were tellingly called ‘other religions’. By making new appointments in the field of Buddhist Studies he began what has remained an important part of the teaching and research of the department.

Dennis is survived by three of his four children, and we offer our condolences to his family and to his many friends in the academic community.