Cycle training for children has benefits in adolescence 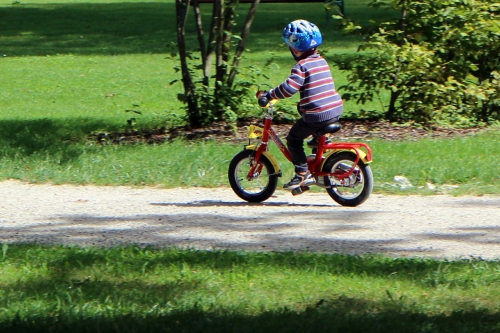 A large-scale UK study of cycling and related safety behaviours, by researchers from Children of the 90s, found children who did a National Cycle Proficiency Scheme course in primary school carried positive cycling behaviour into adulthood.

They were also more likely than children who didn't do a course to:

Regardless of training, however, the researchers found:

The findings of the research, conducted on 5,415 participants in Children of the 90s, indicate cycle training courses for children can have positive and lasting benefits that persist from childhood into adolescence. However, the low use of helmets and high-visibility clothing, and the low levels of cycling to school among girls, suggests more can be done to encourage safe cycling among teenagers.

Dr Alison Teyhan, who led the research said: "The aim of our report was to evaluate how effective cycle training for children is at promoting cycling and safe cycling behaviours. We found that cycle training has benefits that continue into adolescence – trained children are more likely to own and use a cycle helmet, to wear high-visibility clothing, and to cycle to school, when they are teenagers.

"While these are positive findings, we also found that many teenagers don't wear a cycle helmet or hi-vis clothing, and few teenage girls cycle even though the majority of them own a bike. There is therefore great potential to increase cycling, and safe cycling behaviours, in young people."

She added: "In countries with high rates of cycling like Denmark, Germany and the Netherlands, the use of protective equipment is low because the safety focus lies elsewhere. Wearing a helmet or hi-vis clothing does not automatically make cyclists safer, as there are lots of factors involved in cycling safety, including driver behaviour, the physical separation of bikes and vehicles, and traffic-calming measures in residential areas."

'The impact of cycle proficiency training on cycle-related behaviours and accidents in adolescence: findings from ALSPAC, a UK longitudinal cohort' by Alison Teyhan et al in BMC Public Health

In the UK in 2013, almost 2,000 child cyclists were injured in road traffic accidents and six were killed.

Children aged 10-15 years are at greater risk of having a cycling accident that any other age group apart from the over 60s.

Head injuries are the greatest health risk to cyclists and evidence shows that helmets reduce the risk of head, brain and facial injuries, and death, in cyclists involved in a crash.

Education is one strategy to reduce cycle-related injuries, and many countries have practical cycle training courses for children. In the UK, the National Cycle Proficiency Scheme (NCPS) was first introduced in 1947 and rebranded Bikeability in 2007. Currently, around half of children are trained before they leave primary school.

Cycling has many benefits, including being environmentally friendly, economical, and giving young people independence. Cycling to school has been shown to improve the cardiovascular health of children and adolescents.