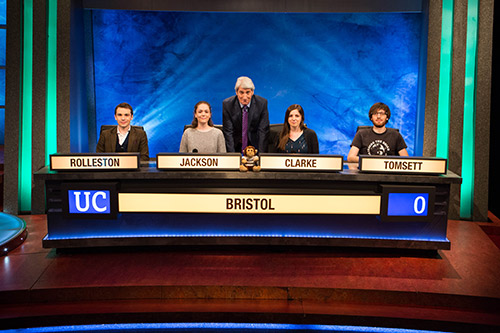 The University of Bristol's quest to prove its quizzing prowess begins on Monday [11 July], when its team takes on Sheffield University, in a match which kicks-off the new series of University Challenge

The team has already fought off fierce competition from the country's brainiest students to reach this stage, with over 130 student quiz teams auditioning for a coveted place on the show's 53rd series.

Viewers can see how they fare against Sheffield University on Monday, at 8pm on BBC2.

The final five Bristol teammates, chosen from hundreds of Bristol students who applied, are:

All applicants were put to the test by the University of Bristol's Students' Union (Bristol SU) in November last year, competing in three rounds of mentally gruelling tests.

The successful team first needed to pass a test and an interview with the production team, who then selected the 28 teams who would appear on television.

After intense training, the team headed to the studios in Salford's Media City where they came face-to-face with Paxman and began their quest to become University Challenge Champions 2017.

Team captain Alice Clarke said: "While there were some daunting moments, appearing on University Challenge was overall great fun. We met some wonderful people in the competition, as well as getting to know each other and other University staff along the way.

"I'll never forget the excitement of entering the set and taking our seats; some of us have watched the program since we were in junior school and it was a brilliant and strange moment to realise we were really on it.

"It was a very different experience to actually participate in the buzzer race, rather than call out answers at home. We were proud to represent Bristol."