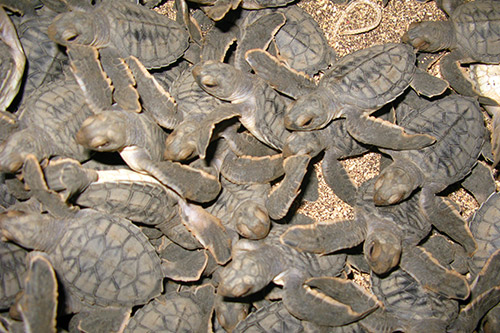 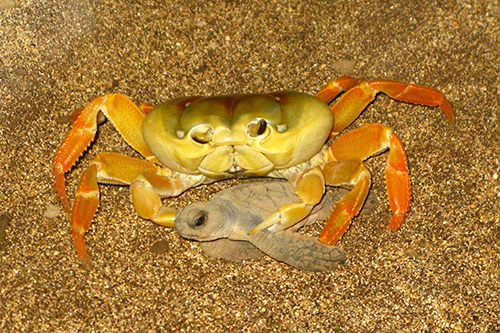 New research has found that green turtles hatching en masse from their nests 'swamp' predators, allowing more individuals to reach the safety of the sea.

The study, by the Universidade Federal de Alagoas in Brazil and the University of Bristol in the UK, was carried out on a pristine and remote island near Brazil where there are 3,600 green turtle nests (Chelonia mydas) per year and very little human disturbance.

Researchers observed 33 of these nests every half an hour throughout the night to discover how simultaneously emerging from individual nests helps baby turtles to survival.

The main predator of green turtle hatchlings on the island is the yellow crab (Johngarthia lagostoma), which is not much larger than the hatchlings themselves. This means they have a long 'handling time' while they grapple with their bulky meal, so they were easily observable and remained close to the point of capture.

Findings, published in Proceedings of the Royal Society B today [6 July], show that mass departures of green turtle hatchlings saturates the foraging ability of the yellow crab, particularly as it spends a long time handling each prey item.  Individuals emerging from their nests in bigger groups are therefore significantly more likely to survive.

Over 3,000 turtles hatched during the study. Typically 50 turtle hatchlings emerged at a time from a nest. Bigger groups led to decreased predation during the crawl to the sea, indicating that risk was 'diluted' between nest-mates.

Dr Christos Ioannou, a NERC-funded fellow from the School of Biological Sciences at the University of Bristol, said: "The biology of the turtles and crabs helps us rule out other possible ways for bigger groups to avoid predators; for example, the hatchlings don't team up to protect themselves.

"They also mostly hatch at night, so the crabs shouldn't be 'confused' by seeing lots of prey at once, which is often a problem for visually hunting predators like falcons."

In future, more studies are needed under different predation scenarios to answer why synchronous emergence evolved in animals, and what factors influence timing. However, this is difficult as many coastal areas have been modified by humans, so finding a truly natural habitat for observations of turtles is becoming increasingly difficult.

'The anti-predator role of within-nest emergence synchrony in sea turtle hatchlings' by Robson G. Santos et al in Proceedings of the Royal Society B.