Female scientists bring science to the streets of Bristol 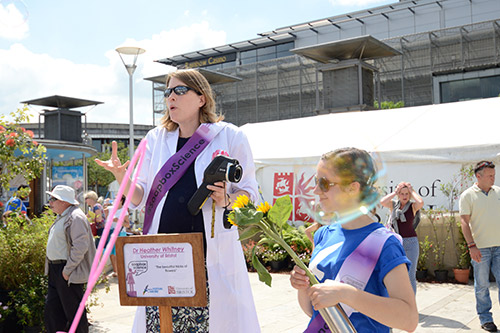 Soapbox Science is set to transform Broadmead Shopping Centre into a site of scientific debate when leading female scientists engage passers-by in cutting edge research on the Saturday [16 July].

The pioneering event aims to challenge traditional science stereotypes and to take science out of institutions directly to the public.

Soapbox Science was founded in 2011 in London, by Dr Seirian Sumner, from the University of Bristol, and Dr Nathalie Pettorelli, from the Zoological Society of London. This year the concept has gone international, with 13 events up and down the UK and one in Brisbane, Australia.

Soapbox Science Bristol will feature 12 female scientists from across the South West, who will ditch their power points and lecture halls in favour of down to earth settings so that everyone can access the latest in scientific discovery in an interactive, non-threatening environment.

There was strong competition to appear at the Bristol event, and the winners' discussion topics range from the brilliance of bees and magic of mushrooms, to whether stress can kill your brain cells and how we can link chemistry with sustainably energy.

The event will follow the format of London's historic arena for public debate - Hyde Park's Speaker's Corner. Speakers stand on custom made Soapbox Science soapboxes, arranged in a semi-circle facing slightly inwards to create space for a crowd to gather.

The public will be invited to learn, question and interact with the researchers during one-hour sessions, which showcase four to five speakers per session.

Dr Seirian Sumner, whose research looks at the social evolution and behaviour of insects, said: "There's more to Soapbox Science than just a science outreach event. It champions the fabulous female scientists we have in the UK, providing accessible role models for the next generation of female scientists, and promoting the visibility of women in science to the general audience."

Soapbox Science promotes gender equality in science, technology, engineering and maths (STEM) by challenging accepted views of what scientists should look and sound like. Its long-term priorities are to change the experiences of women in science through campaigning for equality in academic institutions, government, and wider society.

Soapbox Science is sponsored by the Science and Technology Facilities Council (STFC).

Soapbox Science Bristol takes place from 12pm to 3pm on Saturday, 16 July at The Podium in Broadmead Shopping Centre, Bristol.