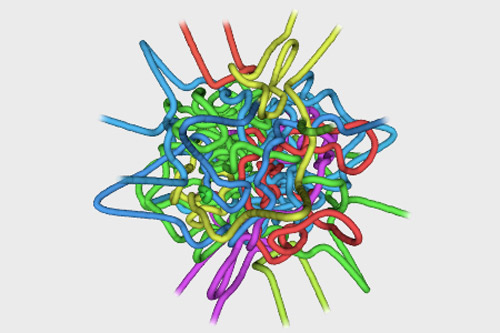 Tangled quantum vortices. Each vortex line is shaded in a different colour, and may be knotted or linked with the others School of Physics © University of Bristol

New research, using computer models of wave chaos, has shown that three-dimensional tangled vortex filaments can in fact be knotted in many highly complex ways.

The computer experiments, by academics at the University of Bristol, give rise to a huge variety of different knots, realising many that have been tabulated by pure mathematicians working in the field of knot theory.

Waves surround us all the time: sound waves in the noise around us, light waves enabling us to see, and according to quantum mechanics, all matter has a wave nature.  Most of these waves, however, do not resemble the regular train of waves at the shore of the ocean — the pattern is much more chaotic.  Most significantly, the whirls and eddies form lines in space called vortices.  Along these lines, the wave intensity is zero, and natural wave fields - light, sound and quantum matter - are filled with a dense tangle of these null filaments.

Mark Dennis, Professor of Theoretical Physics in the School of Physics, said: "Although the computer models were framed in the language of quantum waves, these results are expected to be completely general, suggesting a new understanding of the complexity of the three-dimensional optical and acoustic landscapes that surround us every day."

This work is part of the Scientific Properties of Complex Knots (SPOCK) project, a collaboration between the Universities of Bristol and Durham. The aim of the project is to create new computational tools and mathematical techniques for the analysis, synthesis and exploitation of knotted structures in a wide range of complex physical phenomena.

The research, funded by the Leverhulme Trust, is published today in Nature Communications

The Leverhulme Trust was established by the Will of William Hesketh Lever, the founder of Lever Brothers. Since 1925 the Trust has provided grants and scholarships for research and education. Today, it is one of the largest all-subject providers of research funding in the UK, distributing approximately £80m a year. For more information about the Trust, please visit http://www.leverhulme.ac.uk