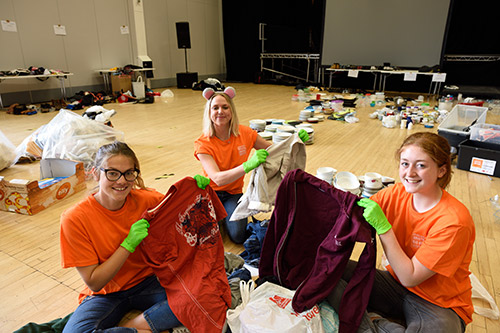 Volunteers sort through items donated to the Big Give 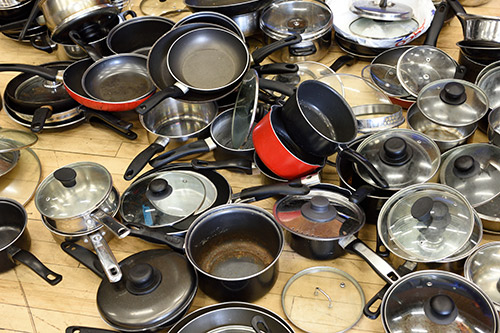 Pots and pans were among the items donated

Tonnes of items left behind by students at the end of term have been sorted and distributed to charity, with the aim of raising over £125,000 for good causes.

Students, as well as the public, have been donating their unwanted goods throughout May and June, turning their trash into treasure.

Last year, 72 tons of reusable goods were donated to local and national charities and raised up to an impressive £125,000 when sold.

Goods donated include kitchenware, bedding clothes, food, sports equipment and books – the vast majority being collected from students living in halls of residence.

Organiser Tom Garrood, from Bristol Hub – a student-led group which tackles social problems, said: "It's amazing what gets donated that might otherwise be thrown away. Bristol Big Give is a really efficient way of recycling these unwanted items - not only does it give back to the local community but it's good for the environment and benefits very worthy causes."

The scheme has had a profound impact on unsightly waste and fly-tipping at the end of term, helping to improve the quality of life for local residents and aid relationship building between neighbours in areas with a high student population.

Rose Rooney, Sustainability Manager at the University of Bristol, said: "The Bristol Big Give is an essential part of how we manage student waste at the end of term citywide. It offers students good opportunities to have a positive impact on their local environment, saves resources and helps a multitude of local charities."

Nigel England, UWE Community Liaison Manager, said: "Bristol Big Give is an excellent partnership campaign, bringing together the concerted efforts of people from many different organisations across the city. This year we door knocked and spoke to over 1000 student households across Bristol about responsible waste management and use of the BHF charity banks. It is heart-warming to see students supporting local charities by donating their unwanted items."