House hunting ants take the hassle out of moving 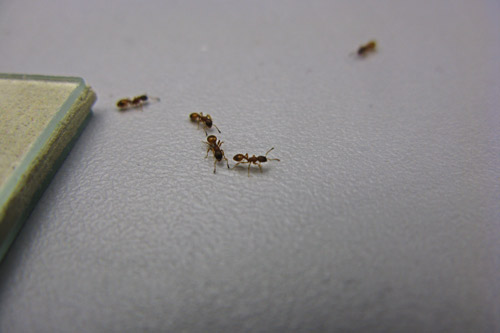 Ants use tandem running to inform colony members about a new nest site and to organise the subsequent migration. Thomas O'Shea-Wheller

When it comes to moving house, ants have it down to a fine art, new research from the University of Bristol has shown.

At some point in our lives, many of us have been forced to ask for directions. However, the level of detail we require from such directions varies widely, depending on how far away our destination is.

Researchers at Bristol’s School of Biological Sciences have found this rule also applies to colonies of ants, but on a much larger scale. While humans may need directions to help find a friend's house, or a local café, navigation is paramount for ants when they must migrate to a new nest site; a complex and highly-organised process.

The research team's results are published this week in The Science of Nature. They used the house-hunting ant (Temnothorax albipennis), which regularly migrate when better lodgings become available, using a process called tandem running to inform colony members about the move and organise the subsequent migration.

Tandem running involves one ant that knows the location of a new nest leading an uninformed colony member to it, and sometimes also back again. During this, one ant teaches another the route to and from the new nest, effectively giving it 'directions'. Once a certain number of ants are introduced to a new site, a so-called quorum threshold is reached, signalling that the colony has made its decision.

The researchers found house-hunting ants will adapt the way that they go about such moves, by regulating their rate of tandem running dependent on the distance to a new dwelling. The further away it is, the more ants are involved in these runs, and the more back-and-forths ants will make to carry over information about the new location to their uninformed nest-mates. In so doing, the quorum threshold is reached more quickly, and the rapid social carrying phase is kick started.

Lead researcher Thomas O'Shea-Wheller explained: "Our experiments found that when colonies had to travel further to reach a new home, they increased their commitment to tandem running – a behaviour by which informed workers, who already knew the way, taught their naïve nest-mates the route.

"In this way, colonies were able to counteract the difficulty of finding a distant nest site, simply by increasing the rate at which individuals gave each other 'directions'. Interestingly, the process is controlled by basic rules, based on the discovery rate of a new nest site, rather than by direct measurement of distance.

"As such, the amount of directional information that a colony gathers increases as a function of migration distance, kind of like a self-organising route planner."

The team's results demonstrate that colonies are able to flexibly emigrate in a decentralised fashion, and indicate that when it comes to giving directions, ants are streets ahead.