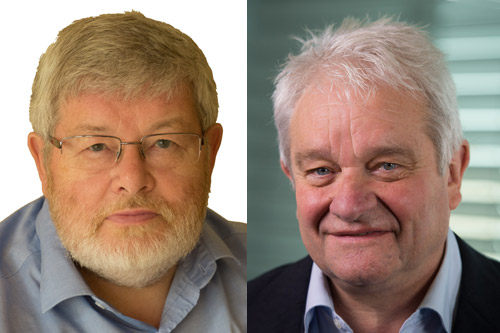 Sir Paul Nurse, the next Chancellor of the University of Bristol, and Professor Kelvyn Jones of the School of Geographical Sciences and the Centre of Multilevel Modelling, have achieved the distinction of being elected Fellows of the British Academy.

At its Annual General Meeting yesterday [Thursday 14 July] the Academy welcomed the 42 new UK Fellows elected for their eminence in research and publication. Professor Jones's election as Fellow of the British Academy reflects the cross-disciplinary nature of his work to both sociology, demography and social statistics and to anthropology and geography.

Honorary Fellows elected have 'contributed signally to the promotion of the purposes for which the Academy was founded', either as persons of academic distinction in other fields whose work has a bearing on the humanities or social sciences; or as leading figures or philanthropists who have themselves done distinguished work in the Academy's fields of interest or promoted or advanced the causes for which the Academy was founded.

The Academy is the independent national institution for the humanities and social sciences.  It is the UK's expert body that supports, speaks for and spans the full range of subject areas from history to psychology, economics to law, literature to philosophy and languages to archaeology. Election is a mark of distinction, as only a very small number of scholars in any field are elected.

Kelvyn Jones, Professor of Human Quantitative Geography, said: "It is the greatest possible academic honour to join the distinguished Fellowship of the British Academy. I am delighted to being elected to such a prominent body and look forward to playing an active role in it, especially supporting and encouraging quantitative social science in all its forms. I am most grateful for the generous and stimulating support of colleagues who have made this achievement possible. I would particularly like to thank those who develop and maintain software and IT facilities without which my work would be impossible."

Professor Jones's pioneering research ranks him as one of the world's leading human geographers. Recent work with colleagues has including successfully forecasting the EU referendum results for the areas on which they are announced - a correlation of 0.82 between actual and predicted leave vote was achieved; a study that showed that lack of growth preceded debt rather than followed, thereby casting doubt on austerity programmes being imposed on countries like Greece; and work that showed that ethnic segregation was much lower than in USA and against much popular commentary was decreasing over time in the UK.

One recent piece of work that started as an undergraduate dissertation involved the quantitative analysis to find the best Formula 1 driver of all time, taking account of team performance and under different racing conditions. Team effects were shown to be more important than driver effects, and increasingly so over time, but their importance reduced in wet weather and on street tracks. This received over 2.7 million twitter views after being re-tweeted by Fernando Alonso and Alain Prost and appearing in 70 newspaper outlets worldwide.

Earlier in his career – and also recognised in his election – Professor Jones made significant contributions to the study of the geography of health. This work focused on the geographical inequalities in mortality in advanced economies and has involved following a cohort of 9,003 individuals since 1985 and examining the nature of place effects, particularly the mortality of ‘poor people in poor places', poor people do indeed die young, especially if they live in poor areas.

Sir Paul is a leading geneticist and cell biologist. His work on the control of cell division underpins current research into treatments for cancer and other serious diseases.

Since 2011, Sir Paul has been the Director and Chief Executive of the Francis Crick Institute, a London-based biomedical research institute which opened in 2015.

Sir Paul Nurse FRS, and Professor Jones FBA, join Emeritus Professor Peter Haggett and Professor Ron Johnston of the School of Geographical Sciences and Professor Harvey Goldstein and Visiting Professor Fiona Steel of the Centre of Multilevel Modelling who are long–standing Fellows; a testament to the world-class research environment at the University and the distinctive expertise in quantitative social science.

About Professor Kelvyn Jones
Kelvyn Jones holds a BSc and PhD in Geography from University of Southampton. Before joining the University of Bristol he worked as Professor and Head of Geography at the University of Portsmouth. He is also a Fellow of the Learned Society of Wales, Fellow of the Academy of Social Sciences, and in 2013 was awarded the Murchison Award, the senior award of the Royal Geographical Society. He was appointed as a panel member for Geography and Environmental Studies for two Research Assessment Exercises and led the RAE/REF submission for the School for the last two assessments when the Bristol geography department was placed in first position, a position it has occupied in each and every assessment exercise since its inception.

Professor Jones's research outputs can be downloaded from: