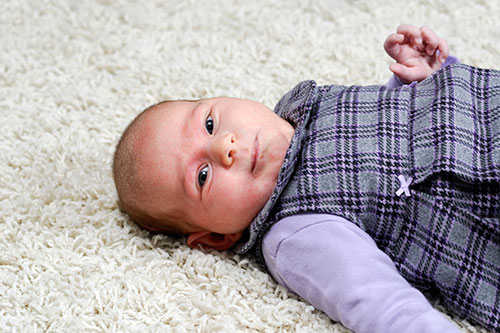 Researchers at the University of Bristol are looking for pregnant women to take part in a study into preventing babies developing eczema. The study, called Barrier Enhancement for Eczema Prevention (BEEP), aims to recruit 1,300 babies and find out if the application of non-cosmetic moisturisers, along with best practice skin care advice, could prevent the onset of eczema in high-risk babies.

Pregnant women (or women who have very recently given birth) in the West of England, who have eczema, asthma or hay fever in the immediate family, are being invited to participate in the study. The babies will be split into two groups, with both groups given the best skin care advice, but with one group, decided at random, asked to supplement that best practice advice with emollients. These non-cosmetic moisturisers soften the skin and are already in common use by people with eczema.

Hywel Williams, professor of skin diseases and co-director of the Centre of Evidence Based Dermatology (CEBD) at the University of Nottingham, is leading the study. He said: ‘Wouldn’t it be great if we could prevent eczema? Although treatments have improved, attempts to prevent it have proved unconvincing and inconsistent. Moisturisers are one of the commonly used treatments for childhood eczema, but they have not been properly studied for the prevention of eczema. This study will hopefully tell us whether using moisturisers after birth can prevent or reduce the severity of eczema. The information we gain will be of benefit to eczema sufferers in the future.’

Dr Matthew Ridd, a North Somerset GP and senior lecturer at the University of Bristol, is leading recruitment in the west of England. He said: ‘I’m delighted parents and their children have the opportunity to take part in this exciting and important study, which will help us better understand the causes of eczema, and how to prevent it.”

It is thought skin barrier dysfunction (dry skin and increased trans-epidermal water loss) could be a primary event in the development of eczema and atopy. Emollient therapy has been shown to improve skin barrier function by providing lipids to the outermost layer of skin, in turn improving skin hydration by trapping in water. Early use of emollient could lead to a potential improvement in skin barrier function, which could in turn prevent or delay eczema from starting.

So far the BEEP trial has recruited 794 volunteers nationally, but the overall target is 1,282. The research site in the west of England is Bristol.

Professor Williams said: ‘Until we have completed this trial and the results have been analysed, we really won’t know whether emollients work or not, and only by running this trial will we ever know the answer.’

1. Eczema is a very common skin problem affecting 16 to 30 per cent of children in the UK and around 20 per cent worldwide. The onset of eczema usually occurs in infancy, and generally dry skin is one of the first symptoms in babies who eventually develop the condition.

2. The BEEP study is managed by the Nottingham Clinical Trials Unit at The University of Nottingham and funded by the National Institute for Health Research (NIHR) Health Technology Assessment (HTA) programme. Researchers from the University of Bristol’s Centre for Academic Primary Care are recruiting to the study locally from January 2016 until November 2016.

4. A video about the BEEP study https://goo.gl/drSA5V

5. The National Institute for Health Research Health Technology Assessment (NIHR HTA) Programme funds research about the effectiveness, costs, and broader impact of health technologies for those who use, manage and provide care in the NHS. It is the largest NIHR programme and publishes the results of its research in the Health Technology Assessment journal, with over 700 issues published to date. The journal’s 2014 Impact Factor (5.027) ranked it two out of 85 publications in the Health Care Sciences and Services category. All issues are available for download, free of charge, from the website. The HTA Programme is funded by the NIHR, with contributions from the CSO in Scotland, NISCHR in Wales, and the HSC R&D Division, Public Health Agency in Northern Ireland.www.nets.nihr.ac.uk/programmes/hta

6. The National Institute for Health Research (NIHR) is funded by the Department of Health to improve the health and wealth of the nation through research. Since its establishment in April 2006, the NIHR has transformed research in the NHS. It has increased the volume of applied health research for the benefit of patients and the public, driven faster translation of basic science discoveries into tangible benefits for patients and the economy, and developed and supported the people who conduct and contribute to applied health research. The NIHR plays a key role in the Government’s strategy for economic growth, attracting investment by the life-sciences industries through its world-class infrastructure for health research. Together, the NIHR people, programmes, centres of excellence and systems represent the most integrated health research system in the world. For further information, visit the NIHR website (www.nihr.ac.uk).

7. This article presents independent research funded by the National Institute for Health Research (NIHR). The views expressed are those of the author(s) and not necessarily those of the NHS, the NIHR or the Department of Health.”