New book on food fraud sorts the beef from the bull 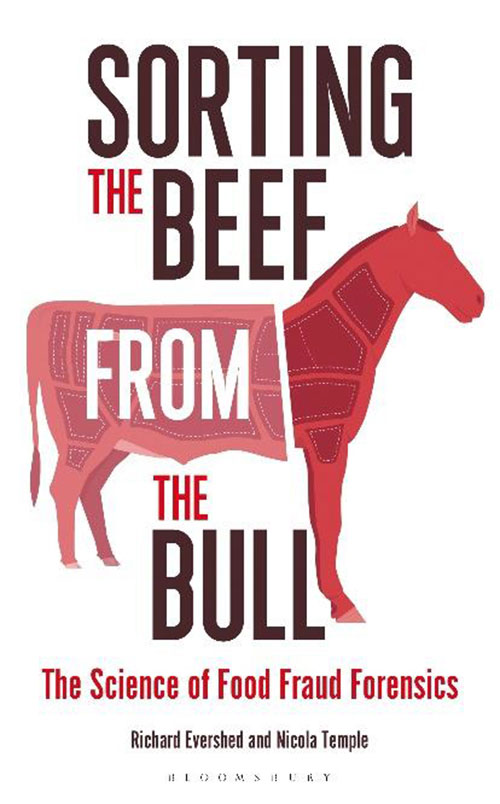 A new book, co-authored by Professor Richard Evershed of the University of Bristol, which explains the role of science in uncovering some of the century’s biggest food scams is published by Bloomsbury this week.

Sorting the Beef from the Bull explores the arms race between food forensics and fraudsters as new methods of detection spur more creative and sophisticated means of committing ‘food fraud’.  Co-author Professor Evershed developed a method for detecting the highly lucrative but illegal adulteration of vegetable oil which is now an international standard in the food industry.

Horsegate, the 2013 scandal when horse meat was discovered in burgers and ready-meals sold in UK supermarkets, made alarming headlines but it is just one of innumerable cases of food fraud.  Recent scandals include rat sold as mutton in China, unidentified meat in curries, goat’s cheese made from sheep milk and cheap oriental perch sold as sea bass. Vegetarians and vegans aren’t exempt: honey, spices and fruit juices are some of the most adulterated products on the market.

Centuries ago, the Romans added lead to sour wine to mask the flavour and fraudsters likely began tinkering with our food centuries before them.  And, as the authors of Sorting the Beef from the Bull demonstrate, food fraud is likely to get worse before it gets better.

The UK’s Food Standards Agency estimates 10 per cent of the food on supermarket shelves is adulterated, but that’s just an educated guess.  As our urban lifestyle and global supply chains take us further away from our food sources, there are increasing opportunities for dishonesty, duplicity and profit-making short cuts.

Whether it’s a matter of making a good quality oil stretch a bit further by adding cheaper oil or labelling a food falsely to appeal to current consumer trends such as pomegranate juice or Manuka honey, it’s all food fraud.  It costs the food industry billions of dollars each year, and the price to consumers may be even higher, with some paying for these crimes with their health and in some cases even their lives.

What is to be done? Some fraud can be detected relatively easily: suspicious saffron threads reveal their true colours in tepid water, leaching their dyes into the water, leaving colourless fibres of beets, grass, silk and even meat behind; others require increasingly sophisticated scientific techniques.

But government agencies and regulators can only go so far: Sorting the Beef from the Bull is also a call to arms to consumers.  Keeping ourselves informed, focussing on what whole, good food tastes like and remembering that ultimately we get what we pay for are key tactics in the battle against fraud.

Sorting the Beef from the Bull: The Science of Food Fraud Forensics by Richard Evershed and Nicola Temple £16.99