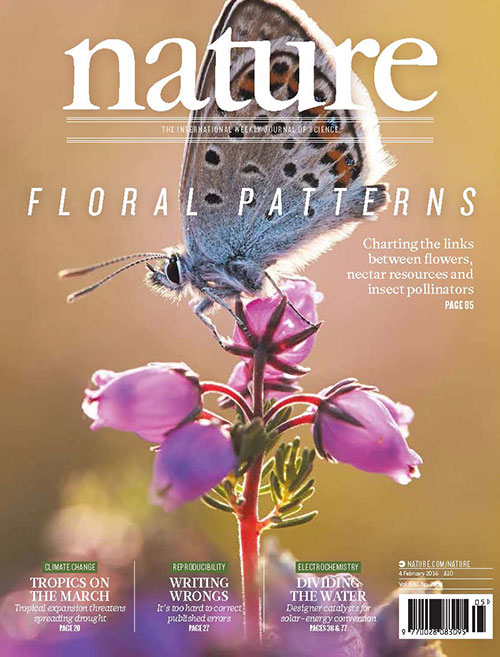 The study features on the cover of this week's edition of Nature, illustrated by an image of bell heather (Erica cinerea) flowers with a resting silver-studded blue adult butterfly (Plebejus argus) courtesy of Nature 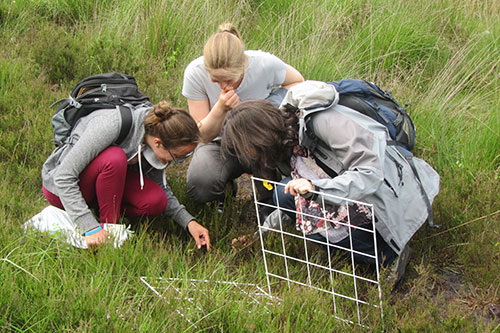 The first ever Britain-wide assessment of the value of wild flowers as food for pollinators, led by the University of Bristol, shows that decreasing resources mirror the decline of pollinating insects, providing new evidence to support the link between plant and pollinator decline.

In recent years, there have been considerable concerns over threats to wild bees and other insect pollinators which are vital to the success of important food crops and wild flowers.

Amongst the many pressures facing pollinators, a key factor is likely to be decreasing floral resources in Britain.

The study, published today in Nature combines vegetation survey data recorded over the last 80 years with modern day measurements of nectar to provide the most comprehensive assessment ever published.

In the study, researchers from the University of Bristol and University of Leeds worked with  scientists from the Centre for Ecology and Hydrology and Fera Science Ltd, to find substantial losses to nectar resources in England and Wales between the 1930s and 1970s – a period closely linked with agricultural intensification.

By 1978, the researchers discovered that nectar resources had stabilised, and actually increased from 2000. The findings compliment indications suggesting that declines in pollinator diversity slowed down or partially reversed over that period.

Professor Jane Memmott from Bristol’s School of Biological Sciences, said: “Over the last few decades despite stabilisation, the diversity of nectar sources has declined – a trend seemingly mirrored in the diversity of pollinator species.”

The study also focused on the type of habitats most beneficial for pollinators, highlighting arable land as the poorest source of nectar: both in terms of amount and the diversity of sources. Improved grasslands could however contribute the most to national nectar supply if management favoured greater flowering of plants such as white clover.

Lead author Dr Mathilde Baude, formerly of the University of Bristol and now at the University of Orléans said: “Nationally, a small number of plants contribute massively to nectar provision including clover, heather and thistles. These very common species are very important to ecosystem functioning, yet they are often disregarded.”

Professor Bill Kunin of the University of Leeds, said: “Farmers on Agri-Environment schemes can plant wild flowers to help improve the value of their land for pollinators, but the areas involved have been small and thus the contribution to floral resources at the national scale is still low. On the other hand, there are vast areas of improved grasslands, and small changes in management to increase wild flowers could make a huge contribution nationally.”

The Insect Pollinators Initiative is joint-funded by the Biotechnology and Biological Sciences Research Council (BBSRC), Defra, the Natural Environment Research Council (NERC), the Scottish Government and the Wellcome Trust. It is managed under the auspices of the Living with Environmental Change (LWEC) partnership.