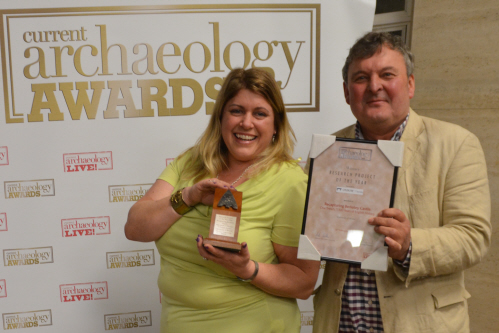 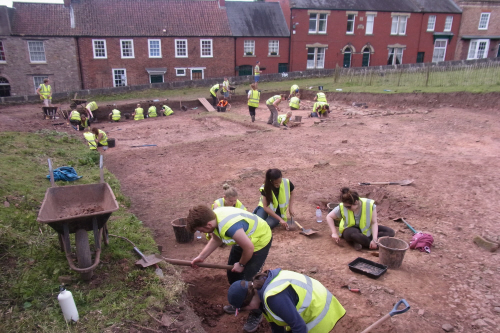 Staff and students work on the site in Berkeley

A major project investigating the medieval castle and landscape at Berkeley, Gloucestershire, has won a national award, voted for by the public and readers of Britain's most popular archaeology magazine.

Since the project got underway in 2006, it has discovered thousands of artefacts and at least six buildings ranging from a Saxon nunnery to an Elizabethan pub, while training over a thousand students in archaeological field methods.

The excavation is jointly directed by Professor Mark Horton and Dr Stuart Prior of the Department of Archaeology and Anthropology.

Professor Horton said: "This award is a great recognition of both the research and the experience that we can give to our students - to meticulously uncover and record for posterity, millennia of our national story, from when the Romans first settled Berkeley, to one of the richest Anglo-Saxon Monasteries, to a great Baronial castle, and a medieval and post-medieval country town."

The Berkeley project fended off tough competition to be named Current Archaeology Research Project of the Year for 2015-16. Also in the running was the rediscovery of the site of the Battle of Bannockburn and the excavations on the Hadrian's Wall fort at Vindolanda.

Previous winners have included the Stonehenge Riverside Project and the investigations of the Mesolithic site of Star Carr.

Such a concentration of archaeology at a single location is exceptionally unusual in Britain, and is witness to the rich history of Gloucestershire from the prehistory to the present day.

Charles Berkeley, Castle Director and heir to the castle, welcomed the award and said: "We were delighted to hear about the success. Every year it is delight to have the Bristol University students in the castle, explaining to our visitors what they have found, sharing it through social media, and revealing so much of our history."

About the Berkeley Castle project

The project has been running since 2006 in the grounds of Berkeley Castle, Dr Jenner's House and in the town of Berkeley. It has been supported by the Bristol and Gloucestershire Archaeological Society, the Castles Studies Trust, the Green Apple Scheme and a University of Bristol Teaching Fellowship.

The project is part of an initiative for research-led teaching at the University, forming part of students' undergraduate and postgraduate training. Each year, between May and June, around 70 students work together to uncover the long history of Berkeley, a town that had long-standing links with Bristol through the Fitzharding family who were granted the estate by Henry II in around 1154.

Robert Fitzharding was the leading Bristol merchant of his time and the founder of St Augustine's Abbey, now Bristol Cathedral. John Berkeley, a direct descendant of Robert Fitzharding, still occupies the castle – making it the longest occupied residence by a single family, with the arguable exception of Windsor Castle.

One feature of the project is the strong engagement between the local community and the University students, supported by a Green Apple Award in 2014.  A University Teaching Development Award in 2015 focussed on student as co-creators of their own learning, supporting a pioneering town museum in which finds from the dig were displayed in shop and home windows.  Students also manage social media channels with a popular Facebook site Dig Berkeley that is regularly followed by over 50,000 people worldwide and a Twitter feed @digberkeley with 174,000 followers.

About the Current Archaeology Awards

The Current Archaeology Awards have been running annually since 2009 and recognise the best research project, rescue dig, individual archaeologist and book. The awards are judged on the basis of a public vote. Current Archaeology is the largest circulation archaeology magazine in the UK with a readership of 45,000.