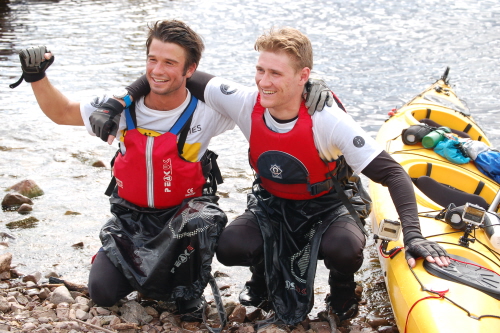 A Bristol student is preparing to kayak continuously for 13 hours, covering 120km of Scotland’s fastest flowing river to raise money for charity.

James Reilly, a 22-year-old medical student at the University of Bristol, will be joining forces with lifelong friend Ted Simpson for the River Spey challenge in aid of the Cystic Fibrosis Trust.

It comes a year after the daredevil pair set a new Guinness World Record for the fastest crossing of Loch Ness by tandem kayak – a feat which attracted headlines around the world.

Their journey begins on Wednesday [24 August] when they set off from Kingussie, negotiating constant rapids and bends over 120km until they reach Spey Bay. The pair are aiming to complete the challenge in 13 hours, setting a new precedent for continuous descent in a canoe.

James said: "We've got a history of finding and setting ourselves quite wacky challenges. We picked the River Spey because it's so long and interrupted - and four times longer than Loch Ness so it's a real test of endurance.

"We have spent the last year researching the route and have found that a few people have been mad enough to attempt a continuous descent. Of those few, the fastest time was recorded at 13 hours and as such is the time we have set ourselves to beat."

The duo will get underway early in the morning, only taking brief breaks to eat some food while the other person continues paddling the kayak.

They're raising money for the Cystic Fibrosis Trust once more, after raising over £2,000 for the cause last year. The cause of CF is very close to both Ted, who suffers from bronchiectasis himself, and James, who as a medic has participated in research projects seeking a cure.

For more information and to sponsor James and Ted, visit their JustGiving fundraising page.

James and Ted completed the challenge in 15 hours, 51 minutes and 43 seconds. James said: "Although we didn’t quite manage to make our target of 13 hours which was set by a kayaker, we still set a new record for the fastest descent of the river from Kingussie to Spey Bay by canoe so are really happy with the result."