Reef castaways: Can coral make it across Darwin’s 'impassable' barrier? 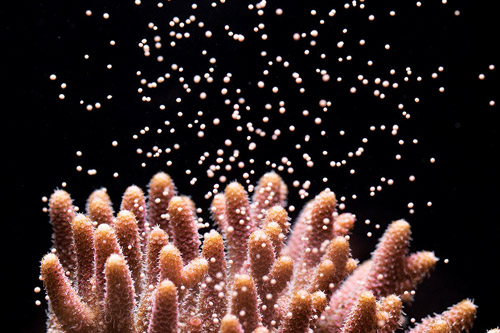 Coral releasing egg/sperm bundles which will be fertilised in the water to form poppy-seed-sized larvae Jamie Craggs, Project Coral, Horniman Museum and Gardens

An international team of researchers have shown that vulnerable coral populations in the eastern tropical Pacific have been completely isolated from the rest of the Pacific Ocean for at least the past two decades.

Ocean currents can change speed and even direction depending on the season or climatic events like El Niño.

The new study led by University of Bristol researchers has used a state-of-the-art computer model to trace the journeys of coral larvae transported at the whim of these currents.

The international team discovered that even during the record-breaking El Niño of 1998, coral larvae could not survive long enough to make the 5,000 km trip from reefs in the central Pacific to those in the east.

These findings support the opinion of Charles Darwin, who considered this intimidating expanse of open ocean 'impassable' - countering recent arguments that the 'East Pacific Barrier' must be breachable since the same coral species are found on both sides. If so, the study argues, such breaches have not occurred recently.

Dr Sally Wood, from the Coral Reef Research at Bristol (CRAB) group in the School of Earth Sciences and lead author of the paper, explains: "Coral build the framework of tropical coral reefs, creating habitats which support one of the most diverse ecosystems on Earth.

"Whether coral reefs can survive the pressure of climate change as well as local stresses will depend to a large extent on the ability of coral to reproduce and disperse; to replenish damaged populations, migrate from deteriorating conditions and colonise new frontiers. So it’s important to map where coral are able to get to."

Dr Erica Hendy, Lecturer in Biogeochemical Cycles in the School of Earth Sciences, added: "However, you simply can’t tag a coral larvae to follow where it ends up as you would a large marine animal like a turtle or shark. Coral larvae are smaller than a poppy seed, soft-bodied and released in overwhelming numbers.

"When swept off their home reef, they have an infinitesimally small chance of ever reaching a suitable place to settle and become a coral colony. We therefore use computer simulations to answer these critical questions about coral biology and conservation."

The study tracked the journeys of over five billion model 'larvae' from 636 remote reefs scattered across the central and eastern Pacific Ocean over a 14 and a half year period. Using the state-of-the-art Connectivity Modeling System, developed by Claire Paris, associate professor of ocean sciences at the University of Miami's Rosenstiel School of Marine and Atmospheric Science and run on the University of Bristol's BlueCrystal supercomputer, the researchers could manage the massive computational demands of modelling such large numbers.

This allowed the team to test, for the first time, a long-standing theory that countered Darwin - that El Niño events promote long-distance dispersal of coral larvae across the Pacific Ocean.

The results showed that the eastern Pacific corals (from Baja California in the north to the coastline of Ecuador and the Galapagos Islands in the south) have been completely cut off from the rest of the Pacific since at least the 1998 El Niño.

As is happening worldwide at the moment, this extreme El Niño wiped out many of the corals in the eastern Pacific.

Coral populations recover from such stress events through the proliferation of survivors and colonisation by new recruits from neighbouring less-impacted reefs. However, the more isolated a reef, the more self-reliant, and the higher the likelihood of local extinctions.

The study's findings provide evidence that local conservation is essential for the sparse and poorly-protected, but economically and environmentally-important coral reefs of the eastern Pacific Ocean.

Dr Wood concluded: "Our results demonstrate that it is even more important to conserve the genetic diversity of the remote reefs in this environmentally hostile part of the Pacific.

"They're on their own out there, so whatever we can do to protect them locally really will have an impact."

The study is an international collaboration between Dr Sally Wood and Dr Erica Hendy of the University of Bristol, School of Earth Sciences and Cabot Institute; Associate Professor Iliana Baums of Penn State University; Associate Professor Claire Paris of the Rosenstiel School of Marine and Atmospheric Science in Miami; Professor Andy Ridgwell of the University of California Riverside and Dr William Kessler of NOAA's Pacific Marine Environmental Laboratory.

The Cabot Institute drives world-leading research on how we depend on, live with and affect our planet.  It stimulates new thinking and strives for new innovations to meet our social and environmental challenges.   Its communities focus on six crucial areas: global environmental change, food, water, low carbon energy, natural hazards and future cities and communities.  Each community is driven by outstanding academics with government, industry and society partners from across the globe.  Working together, they seek radical and integrated solutions to twenty-first century challenges.