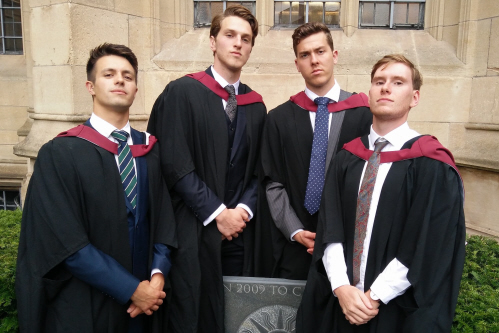 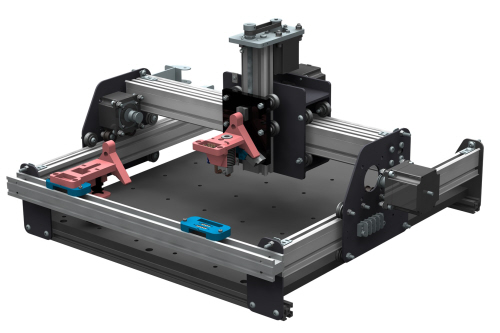 A team of Engineering Design graduates from the University of Bristol has been awarded £20,000 and free business mentoring to launch their educational product that could increase student access to previously expensive manufacturing machines.

The team won a place on a JISC-funded scheme for supporting technology start-up projects after pitching their idea against teams from other universities across the UK.  Alex Michaels, Ed Cooper, Glen Cahill and Jack Pearson are using the funding to get their novel manufacturing and learning product called OMNI off the ground.

The group’s idea began as a University of Bristol final year Engineering Design project, supported by the Manufacturing Technology Centre. The brief was to address the key shortfalls of 3D printing; the slow fabrication speeds, weak and low quality parts and limited functionality. The students developed a multifunctional 3D printing device that can change tools automatically and incorporate other processes to allow for the production of stronger, more functional parts at greater speed than ordinary printers.

After successfully completing the project, the team recognised the educational potential of the prototype that they had developed.  Their invention could increase student access to previously costly manufacturing machines, allowing the user to gain hands-on manufacturing skills without technician training.

OMNI is a low cost, multi-function CNC platform that utilises the capability of a range of manufacturing processes including 3D printing, milling, component placement and metrology on a single flexible platform.

Ed Cooper said: “It was fantastic to be able to use our final year project to develop our start-up idea. The need to address the commercial opportunities and constraints of a real design problem within the project really helped identify how we could develop routes to market.

“We are tremendously excited about the prospect of using the start-up as a platform for engaging school and college students with engineering and the future of manufacturing technologies.”

A recent study by the Institute of Mechanical Engineers (IMechE) found that 59 per cent of graduates lack the practical skills that are needed by the UK’s manufacturing industry. The team hope to tackle this problem through increased machine access and by providing engaging learning tools. Their long-term ambition is to bring OMNI to schools and universities across the UK to help improve science, technology, engineering and mathematics (STEM) engagement and inspire the next generation of engineers and inventors.

Over the next six months, the team look forward to receiving business mentoring from EdTech Futures, experts on educational products, as well as guidance from marketing gurus at The House and support on product delivery from JISC.

The mentorship program follows the popular Lean Startup methodology, which focuses on hypothesis-based validation of a business’ key assumptions. After developing their business plan and product using this method, the team plan to develop a winning investor pitch to attract further funding in January 2017. They aim to launch OMNI in time for the 2017/18 academic year.

About JISC
JISC is the UK higher education, further education and skills sectors’ not-for-profit organisation for digital services and solutions.

Alex Michaels, Ed Cooper, Glen Cahill and Jack Pearson would like to give a special thank you to Dr Paul Harper and Mervyn White who worked closely with the group for the duration of the Masters project and provided invaluable support and advice.