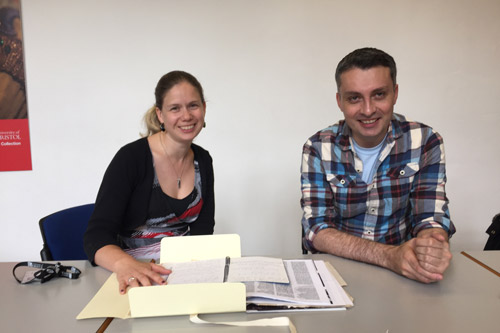 Ian McHugh with Heather Romaine, Keeper: Theatre Archive from the Theatre Collection – with part of the Kevin Elyot archive.

Playwright Ian McHugh has been named as the first ever recipient of the annual Kevin Elyot Award by the University of Bristol Theatre Collection.

The award, created in the memory of the renowned playwright, screenwriter and Bristol drama alumnus, will support Ian to create a new dramatic work inspired by Kevin's archive which was donated to the collection by his sister following his death in 2014.

Around 40 up-and-coming and award-winning writers from across the world applied and the decision came down to a judging panel which included Mamma Mia playwright Catherine Johnson and celebrated actress and life-long friend of Kevin Elyot, Lindsay Duncan.

Ian's work has been produced by Old Vic New Voices, The Bush Theatre, and HighTide.

He said: "It's a huge honour to receive the award – I'm very grateful to the panel and to Kevin's family for the endowment.

"Kevin’s plays have been a big influence on my writing and I'm looking forward to finding new inspiration in the archive, as well as just spending time with his work."

Jo Elsworth, Director of the Theatre Collection, said: "The idea behind the Kevin Elyot Award is to enable a new generation of writers to find creative inspiration in the archive, so that the spirit of Kevin's life and work will live on.

"Ian has already spent time viewing and reading parts of the archive and is pulling together ideas for a new play using Kevin's unique approach to writing and form as inspiration.

"We're really excited about this new project and know that Ian is going to create something that Kevin and his family will be really proud of."

Catherine Johnson commented: "Choosing the inaugural recipient of the Kevin Elyot Award was an exciting and daunting responsibility. Guided by Lindsay Duncan, Kevin's great friend, we kept asking ourselves, 'who would Kevin choose?'

"Ian McHugh's application showed an empathetic understanding o‎f Kevin's work and the potential to produce an extraordinary new piece that would build on Kevin's legacy.

"My own career began with an award in Bristol, so it is an honour be involved with this scheme - all thanks to a very generous donation from Kevin's family."

Lindsay Duncan said: "Ian's application for the award was outstanding. His proposal was detailed, thoughtful, personal and ambitious. Giving the award, for the first time, to someone of such quality, who truly appreciates Kevin's work, was both exciting and very moving.

"Kevin was a glorious man. He was clever and funny. He loved to laugh, but was very, very serious about his work. One of the many criteria we had in judging the submissions for this award, was that the resulting piece of work should be something Kevin would be proud of.

"It means so much to me, as his friend and as someone who respected his writing enormously, that in Ian McHugh, we have someone who cares as deeply as Kevin about his craft and I'm sure will deliver something Kevin would be proud of."