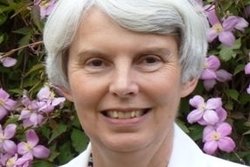 Jean George, formerly Chief Cataloguer in the University Library, died on 9 March 2016 at the age of 63. Her colleague, Dr Peter King, offers a tribute.

Jean was born in Kendal on 13 January 1953, the youngest of four daughters to John and Agnes Dixon, and spent her childhood at nearby Grayrigg. From the age of eleven she attended Kendal High School for Girls, commuting by bus.

Her mother died in 1968, aged only 55, and Jean, who was 15 at the time, subsequently did the family shopping in Kendal in her lunch hour, cooked the meals, and lit the open fire in the winter. Despite this domestic burden she excelled at her academic work and went on to Exeter University, where she studied German between 1971 and 1975, coming top of the class in every year and winning the University’s prize for the best student in the subject on graduation. She stayed on at Exeter for a further year to obtain a PGCE.

She met Robin George at Exeter. They married on 31 July 1976 and set up home in Preston, where Jean started work as a teacher at Morecambe High School. In 1977 they moved to Yatton, near Bristol, where Robin had a new post with British Railways. Jean found a temporary job working in the library of Wessex Water. When that ended, she responded to an advertisement in the Evening Post for a Library Assistant appointment at the University. She was successful, started work in 1978, and soon realised that she had found her vocation.

In 1980 she went to Loughborough University to gain a postgraduate qualification in librarianship, and then returned to Bristol, where she specialised in cataloguing, rising to the post of Chief Cataloguer in 1986, where she remained until retirement in 2011.

A voluntary job then followed with the Bristol Regional Environmental Records Centre. Here her role was to enter into a computer database thousands of individual wildlife records which had been collected over the years. This work fitted well with her previous experience and her love of the natural world.

As well as her own career, Jean also helped Robin with his hobbies and interests. Many weekends were spent at Minehead, where she tended the station gardens whilst Robin drove steam trains on the West Somerset Railway. After a while he founded the Dinmore Manor Locomotive Society (which eventually owned and operated four preserved GWR steam locomotives) and Jean joined the Society's committee to act as its first secretary.

In retirement, Jean and Robin were still at the stage of planning how to spend the years ahead. However, a small and insignificant back pain over Christmas 2015 eventually led to the diagnosis of advanced lung cancer. She died the very next day.

Jean was perfectly suited to her work. She was professional and meticulous. Her attention to detail was legendary, but her very high standards were maintained with humour and grace. She was faithful and loyal, a manager who took a genuine interest in her staff without being intrusive. She was approachable and fair but not soft, never having to raise her voice to exert her authority.

Jean was taken from us far too early and we shall miss her.

She is survived by Robin and her sisters Audrey and Kathleen.