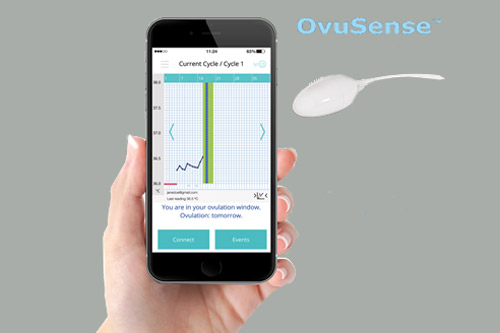 The OvuSense app and sensor

A new real-time fertility monitor, using technology developed at the University of Bristol, has been launched to help women identify their ovulation window and increase the chances of pregnancy.

OvuSense is a sensor and fertility app which measures a woman's core body temperature overnight and then produces a daily graph to identify when a woman is most fertile.

Unlike other fertility trackers, OvuSense, a Class 2 registered medical device, gives 24 hours' advance notice of ovulation, along with a four day ovulation window, which has been clinically proven to be correct 99 per cent of the time.

The technology was developed by Dr Andy Butterworth and Professor Toby Knowles, from the Faculty of Health Sciences at the University of Bristol, and has since been licenced by the University to their spin-out company Fertility Focus, which was founded in 2006 with Bristol alumnus Michael James.

Professor Knowles said: "We're very proud to have played a part in the development of such an advanced and reliable product that really has produced a step-change in the accuracy with which women’s fertility can be monitored, and that has already helped so many women to become pregnant."

The sensor fits comfortably into a woman's vagina, similar to a tampon, and is worn while she sleeps.

It takes a core body temperature reading every five minutes to build-up an accurate picture of the woman's cycle, which is downloaded via the OvuSense app in the morning once the sensor has been removed.

Sue Sundstrom, Head of Commercialisation at the University of Bristol, said: "It's really gratifying to see University research move from the lab and into a real-life application, especially given the positive impact it will have on such an important and distressing problem, changing women's lives for the better."

The OvuSense app for iOS has been launched in the UK and US, with an Android version available at the end of August.

OvuSense works even if there are medical conditions that impact hormone levels, and since OvuSense automatically finds when a user ovulates, in real time, there is no guessing when to start testing each month.

OvuSense is unique, unlike any other fertility monitor or fertility App on the market: