Bristol physicists contribute to the search for new elementary particles 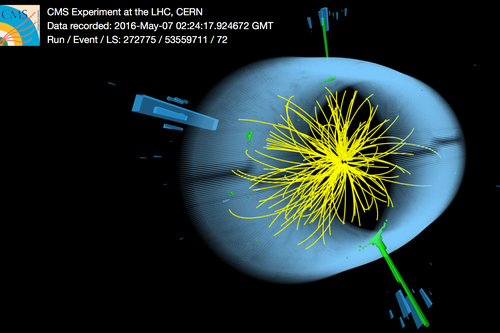 CMS experiment at the LHC CMS/CERN

Scientists at the University are looking for quantum particles that could help shed new light on the existence of dark matter.

From 3-10 August around 1,400 particle physicists from around the world gathered in Chicago for the field’s largest conference, the 38th International Conference on High Energy Physics. Among the most anticipated results were the latest findings of the experiments at CERN’s Large Hadron Collider (LHC) - the world’s highest energy particle accelerator - and their searches for new elementary particles.

In 2016 the LHC has so far performed beyond expectation, exceeding its design intensity. Within two months, the LHC produced about five times the number of proton-proton collisions than in the whole of 2015. This hugely increased data sample strongly enhances the possibility for the decay products of new, so far unobserved heavy particles to be found.

A group of physicists from the University of Bristol contributed their findings to the conference. Working on the Compact Muon Solenoid experiment, they have spent the last months intensely analysing these collisions to find evidence for “superpartners” to some of the well-known particles of the Standard Model and to find evidence for their decay to elusive dark matter particles.

The group led an analysis of the data for signs of partners of the top and bottom quarks and the gluon, as predicted by a theory called Supersymmetry. Supersymmetry relates two different types of particles – those with half-integer spin, and their ‘superpartners’ with integer spin.

To analyse the hundreds of millions of proton collisions, the group uses a dedicated computing cluster optimised for fast data handling and which is co-funded by the University.

Despite having this new data sample at hand, no evidence for the existence of superpartners or the production of dark matter particles was found. However, their absence allows constraints to be set on the mass of the hypothesised new particles.

Dr Henning Flaecher, leader of the Bristol group, said: “While these results put some simple versions of Supersymmetry as the leading theory predicting new elementary particles under strain, there are still a number of viable scenarios that can explain why these hypothesised particles and in particular dark matter, have escaped detection so far.”

Bristol physicists and their international collaborators are now gearing up to explore these areas further with the ever-increasing data sample.

Bristol researchers found that, in certain models, the superpartners of the top and bottom quark would need to be rather heavy, around 900-1000 giga electron-volt (GeV), roughly corresponding to being 1000 times heavier than a proton.

In certain cases the superpartner of the gluon needs to have mass of 1800 GeV or more.  In the same models, dark matter particles can be excluded with masses as large as 400-500 GeV and 1200 GeV, depending on if they are produced in conjunction with top or bottom quark superpartners or gluon superpartners, pushing the allowed masses to much higher values compared to previous results.