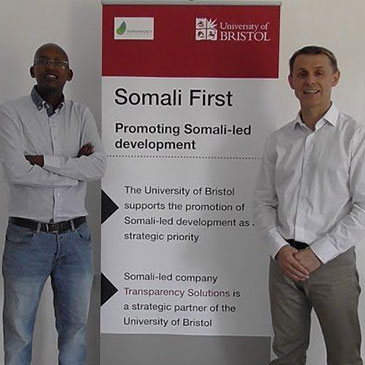 The winners of the University of Bristol’s 2014/15 Engagement Awards, judged by the Engaged University Steering Group, have been announced.

The annual competition is run by the University’s Centre for Public Engagement. Awards are given for outstanding achievement in engagement and researchers at any stage of their careers may participate.

The judges were hugely impressed with the number and quality of applications received this year and made a number of commendations as well as selecting an overall winner.

Professor Eric Herring received the award for his work on the Somali First (SF) initiative, which uses evidence generated by the Transforming Insecurity (Trinsec) project to promote Somali-led development.

SF is a cross-departmental initiative, co-produced with researchers from Somali-led company Transparency Solutions and students from Bristol. It brings together Somali civil society, government, business and research to transform the process of development.

On making the award, the Engaged University Steering Group commended Professor Herring's work, and said: ‘Somali First has developed a model of engagement which shows genuine co-production. The diverse strands of activity, the many partnerships and the high level of impact make it an excellent example of engagement linked to research.’

Abdihakim Yusuf, Transparency Solutions Senior Consultant, Somali First core team member and University of Bristol Honorary Research Associate, said: ‘I am honoured to accept this award with Professor Herring on behalf of the Somali First core team. When scholars really listen to and work with communities from the very outset of their work, exciting things can happen. The usual story about Somalia is state failure, terrorism and piracy. However, among Somalis there is huge capacity and potential, and the University of Bristol is making an important difference in working with Somalis to recognise and mobilise that capacity and potential.’

Professor Nishan Canagarajah, Pro Vice-Chancellor, said: ‘This year’s Engagement Awards competition saw a remarkable number of high-quality entries. It is inspiring to see the rich variety of engagement our academics and students are involved with, and the impact this has had on both the University’s research and teaching, as well as wider society. I am proud to congratulate Professor Herring and the Somali First team on their achievement, as well as those highly commended by the panel.’

Helen Thomas and Penny Evans were highly commended for their work on Girls Making History (GMH), an ongoing Knowle West Media Centre project to raise awareness of the cultural normalisation of partner violence in teenage relationships and social networks. GMH drew on expertise from the young women who participated, as well as academics, charities and third sector organisations, and the Avon and Somerset Police and Crime Commissioner’s office.

The judges were impressed by this project as an outstanding example of co-production which involved innovative techniques and resulted in tangible outcomes.

Dr Victoria Bates and Professor Tim Cole were highly commended for their Conversations about Cinema (CaC) collaboration with Watershed. The project brought academics and cinema audiences together, facilitating meaningful post-screening discussions. With funding from the National Lottery, CaC engaged academics and students from across two faculties at Bristol and over 10,000 cinema-goers, as well as a large online following via filmed talks, podcasts and live Twitter discussions.

The judging panel described it as an outstanding example of a project that uses academic expertise to establish a meaningful dialogue, using innovative methods to create effects in non-standard areas.

Dr Matthew Brown’s wide-reaching engagement work on Britain and the Bolivarian Republics was also highly commended. His public engagement activities include dissemination of research, public lectures across the globe, events, speaking engagements for audiences including the public, diplomats and political activists, his blog Bolivarian Times and regular contributions to BBC programmes on Latin American issues. Dr Brown’s work has been supported by the Venezuelan Ministry of Foreign Affairs, the Minister for Latin America and the FCO.

The Dress/Sense programme, led by Professor Ian Craddock, was highly commended for raising student interest in the area of healthcare technology and generating novel research ideas around its application. As part of public engagement run by the SPHERE project, Dress/Sense was designed and led by researchers and supported by the University senior team, industry partners and the Engineering and Physical Sciences Research Council. School students, undergraduates and postgraduates took part, and the team is seeking to repeat the project regionally or nationally.

Commending the project, the judges noted the collaborative format of the engagement and the focus on tackling the gender imbalance in STEM subjects.

The judges also highly commended school outreach programme Fab Kids, led by Dr Mark Edwards, Kathryn Banfield and Byron Tibbitts. The project involved research staff from across the Centre for Exercise, Nutrition and Health Sciences, students from the MSc in Nutrition, Physical Activity and Public Health, volunteers and teachers working with local school children to promote understanding of healthy lifestyles. Fab Kids has now been delivered to 804 pupils in 29 primary school visits and at two science festivals, with exceptional feedback.

The judges highlighted the extensive amount of engagement work with schools and at festivals, with attention paid to the collection of evaluation in order to ensure sustainability.

The awards will be presented at the Enterprise Dinner on 15 October.

The films from all the winners can be watched in our YouTube channel.

For more information, please contact the Centre for Public Engagement at cpe-info@bristol.ac.uk.