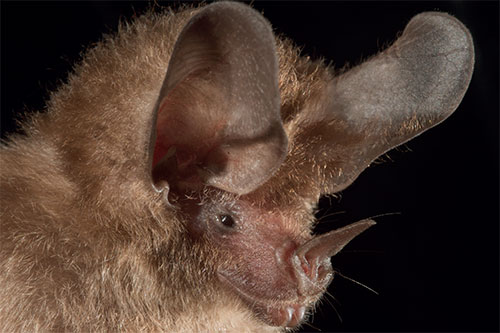 The ability of some bats to spot motionless prey in the dark has baffled experts until now. By creating the first visual images from echolocation, researchers reveal we have been missing how bats sense their world.

Publishing in the journal eLife, scientists from Queen Mary University of London (QMUL) and the University of Bristol suggest that instead of searching for prey directly, bats intimately learn the layout of a home range, down to the surface of individual leaves and stones.  When one of these familiar leaves is covered by an insect, the normal echoes are interrupted and this ‘acoustic shadow’ is a very strong signal to the hunting bat.

The researchers also describe a new phenomenon of ‘acoustic camouflage’, employed by hunted prey to elude the elite hunters.

Most bats hunt by detecting the movement of flying insects using echolocation.  Only a third of all bat species are able to hunt for prey on surfaces.  Previous studies have concluded that these bats must detect prey by sight, smell and sound.

However, the common big-eared bat (Micronycteris microtis), a neotropical species from South and Central America, has been found to use echolocation alone.  Experts have speculated that by hovering beside prey, this species bombards it and the surface on which it rests with short sound waves.  By continually changing their angle of scanning, the prey becomes easier to pick out.

In the new study, researchers in Bristol developed a new imaging technique to allow them to enter the bat’s world view.  They built four acoustic cues into the system, combining the duration and amplitude of echoes with the depth profile of objects and the strength of the shadow cast by insects.

“Using information like X-rays to build pictures is well established in medicine with the use of CT scans and ultrasound, but no-one has ever before attempted to create images from sounds generated in ecology,” said lead author Dr Elizabeth Clare from QMUL.

“We constructed a brand new technique for tomographic imaging which allows us to perceive more accurately which cues are most important to the bat,” said co-author Dr Marc Holderied from the University of Bristol.

The research team found that the acoustic cues available to bats to detect motionless prey don’t improve greatly if the profile of the insect seems to stand out more.  It might be expected that a hawkmoth, which rests with its wings sticking up, would be easier to find than a small butterfly with extremely thin wings.  Instead, detection improves according to the kind of surface on which the insect rests.

Insects are much easier to detect on flat surfaces – such as slate and smooth leaves – and hardest to detect on rough bark.  The data help explain why some species of bat remain faithful to a defined hunting ground and why they scan leaves so thoroughly.  But surprisingly, the team’s data suggest that bat should not look for prey, but search surfaces with which they are familiar, particular smooth ones, and then home in on patches where there are ‘echo gaps’ in what they’d normally find.

“Our findings also suggest a new phenomenon of acoustic camouflage, where insects are harder to discern on rough surfaces such as bark, and bats compensate for this by focusing their attention on the simpler, mirror-like surfaces in their patch,” said Dr Clare.

‘Acoustic shadows help gleaning bats find prey, but may be defeated by prey acoustic camouflage on rough surfaces’ by Clare et al in eLife [Open Access]. Contents, including text, figures, and data, are free to re-use under a CC BY 4.0 license.

eLife is a unique collaboration between the funders and practitioners of research to improve the way important research is selected, presented, and shared.  eLife publishes outstanding works across the life sciences and biomedicine — from basic biological research to applied, translational, and clinical studies.  eLife is supported by the Howard Hughes Medical Institute, the Max Planck Society, and the Wellcome Trust.