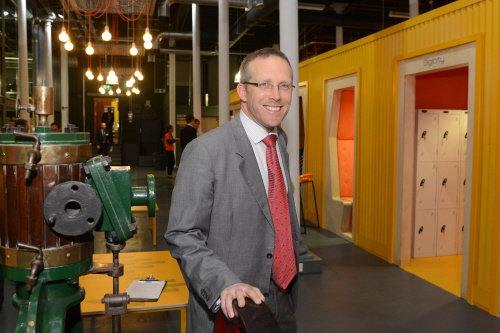 A partnership of UK universities which contributes billions to the economy has today [27 October] been named the best in Europe at helping new businesses. The University Business Incubator (UBI) Index has ranked SETsquared, a partnership of the Universities of Bath, Bristol, Exeter, Southampton and Surrey, as number one for the third year running.

It specialises in growing high-tech start-ups through its incubation programme and other business acceleration services, while also providing mentoring, access to investors and a wide range of industry experts through its network and training programmes.

Over the last 13 years, SETsquared has helped over 1,000 hi-tech start-ups to develop and raise more than £1 billion of investment, as well as contributing over £3.8bn in GVA (Gross Value Added) to the UK economy.

The Bristol SETsquared centre, based in Engine Shed, has helped to generate over £30 million worth of investment for its companies in the last year.

Nick Sturge, Centre Director at Bristol SETsquared, said: “It’s been another fantastic year for the Bristol’s SETsquared, with over £30m invested. Our first full year in the Engine Shed has seen us in the middle of a perfect storm - we’ve seen several tech corporates moving in to or expanding in the city-region as well as a raft of new accelerators and investment funds which all fuel business growth. As well as this, we’re seeing more university spinouts than ever before.

The UBI Index is the first global index to benchmark the performance and best practice of university business incubators. The organisation is holding continental rankings around the world, culminating in a global ranking event in London next month.

Dhruv Bhatli, Co-founder and Director of Research at UBI Global, said: “We’re delighted to see SETsquared hit the top spot in Europe for the third time in a row. The partnership’s continued dedication to entrepreneurs and start-ups has resulted in high economic impact and growth for the companies it supports.”

SETsquared will find out where it stands in the world rankings on 25 November.

Its business incubation programme is ranked by the University Business Incubator Index as the best in Europe and second in the world and over the last decade it has helped over 1,000 high-tech start-ups to develop and raise more than a £1bn of investment.

Independent research carried out by Warwick Economics estimates the economic impact of SETsquared member companies to be £3.8bn over this period, with the creation of 9,000 jobs and that these companies will go on to deliver a further £7.3bn of impact to the UK economy in the decade ahead.