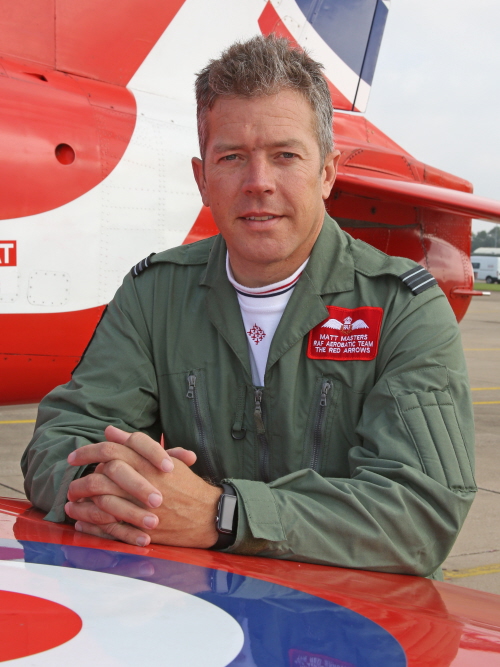 A University of Bristol graduate will soon be soaring through the skies as part of the famous Red Arrows team after securing his dream job. Flight Lieutenant Matt Masters, who graduated from the University of Bristol in 1998 with a Masters of Engineering degree, will undertake six months of intensive training and practice sorties in preparation for the 2016 display season.

He joined the Royal Air Force soon after graduating and was selected for the elite Red Arrows team after impressing during a tough selection process that involved flight tests, interviews and other exercises.

The 39-year-old said: "It has been a childhood dream that I have wanted to become a reality. The Red Arrows' legacy of precision flying and striving for excellence, combined with the overall popularity amongst the British public, were all key factors in inspiring me to join the team.

"I will be extremely proud to be part of a team that can, and has, influenced so many people around the world."

During his Royal Air Force career, Flt Lt Masters flew the Tornado F3 operationally – helping to secure the skies of the United Kingdom on Quick Reaction Alert – and, more recently, he has flown the Hawk T1 while based at RAF Leeming.

Flt Lt Masters, who will fly in the Red 2 position in 2016, said: "Flying in the Red Arrows will be very different to my previous operational flying. While it will still be challenging and very rewarding, there is nothing better than 'raw' flying especially in formation with eight other aircraft.

"The winter training is going to be intense and I am most looking forward to putting together all the parts of the jigsaw and displaying as a nine-ship formation for first time."

The Red Arrows are ambassadors for the United Kingdom and showcase the excellence of the Royal Air Force – performing to millions of people at home and overseas each year.

To be considered for selection, a pilot must be rated as the very best in terms of flying ability, have previously flown operationally and have 1,500 fast jet hours.

On completion of a three-year tour with the Squadron, the pilots either return to the frontline, instructional or staff duties.

Before the pilots can officially wear the team’s famous red flying suits and perform aerobatic displays for a public audience, they will have to complete winter training.

Pilots fly three-times-day, five-days-a-week with each sortie filmed and scrutinised in detail.