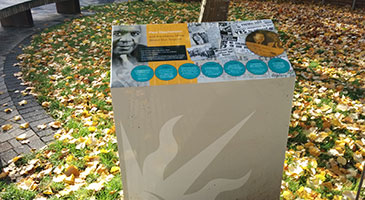 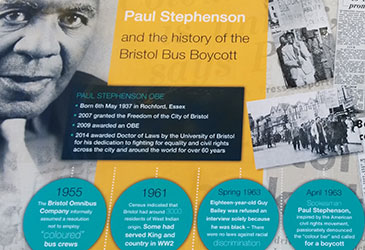 The University’s transport hub in Stoke Bishop has been dedicated to Dr Paul Stephenson OBE, leader of the Bristol Bus Boycott campaign of 1963.

Dr Stephenson headed a small group of Bristolians who challenged the discriminatory practices of Bristol Omnibus Company, which at the time refused to employ people from black and ethnic minority communities.

The boycott began in April 1963 and gathered increasing public support, until on 28 August the Bristol Omnibus Company announced a change in its policy. The following month saw the hiring of the company’s first non-white bus conductor.

Dr Stephenson, who received an Honorary Doctorate from the University of Bristol in 2014, said: ‘The Bristol Bus Boycott has as much to do with the future as with the past; Bristol is still learning how to put the principles of tolerance and equality into practice. We must always remember how strong a force community action can be for positive change.’

Professor Guy Orpen, Deputy Vice-Chancellor, said: ‘Dr Stephenson’s courage and his commitment to making a stand for social justice continue to be an inspiration, over 50 years later. Many Bristol students were among those who took part in the boycott, so we are delighted that we could dedicate the University’s Stoke Bishop transport hub to him, to celebrate this instance of the city and the University uniting to press for change.’