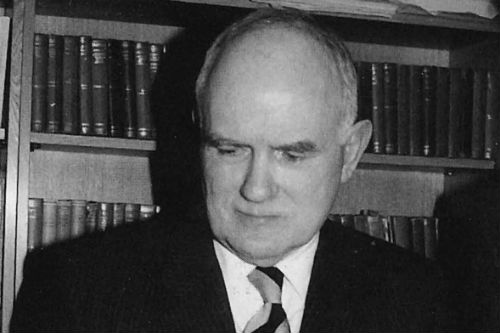 Professor Rudd worked on a wide range of different texts. He was particularly noted for his work on Horace, including The Satires of Horace: a study (Cambridge, 1988) and the Cambridge green and yellow edition of Epistles II (Cambridge, 1989), as well as studies of Roman poetry and satire more generally, and translations of Cicero and Juvenal.

He was a pioneer in the study of the reception of classical literature, with collections such as The Classical Tradition in Operation: Chaucer/Virgil, Shakespeare/Plautus, Pope/Horace, Tennyson/Lucretius, Pound/Propertius (Toronto, 1994) and The Common Spring: essays on Latin and English Poetry (Exeter, 2005). He also wrote a memoir of his early upbringing, Pale Green. Light Orange: a portrait of bourgeois Ireland (Dublin, 1994), which revealed important aspects of his complexity and border-crossing mind.

‘I remember Niall as a genial, generous and irrepressibly witty man – by far the funniest and most wickedly accurate mimic I've ever met. He was also, needless to say, a marvellous Latinist. He knew Latin incredibly well, and regretted that, even among contemporary Latin scholars, that level of knowledge and subtlety of understanding wasn't always replicated. He was at his best when writing about Horace – maybe a kindred spirit. He was also a reception scholar avant la lettre – as his work on the Daedalus and Icarus myth demonstrates.'

As a teacher he was meticulous and engaging. He made the perfect complement to John Gould, his brilliant peer as Professor of Greek in Bristol. Whereas John thrived on ambiguities and paradoxes, Niall wanted accuracy and clarity, and did his best to achieve them.

As a younger colleague in the department, I found him unfailingly helpful. Above all, I never got the impression that he was ‘on the make’ – never, that is, did he seem driven by some personal, self-promoting ambition. If only one could say as much of every senior academic.

On retirement, Niall Rudd returned to Liverpool, and became an Honorary Research Fellow of the English Department there. His last few years were cruelly compromised by Alzheimer’s disease, exacerbated in his final months by malignant facial carcinoma. He died on Monday 5 October 2015 in Wirral St John’s Hospice, leaving wife, Nancy, and children Ian and Jill. There was a small private cremation; a memorial gathering is planned for November.