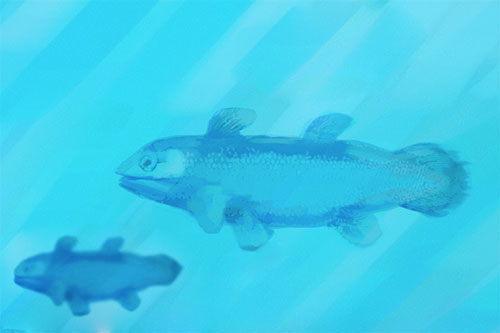 The Jurassic coelacanth Undina, similar to the new finds from near Bristol Harry Allard

The coelacanth fish, found today in the Indian Ocean, is often called a ‘living fossil’ because its last ancestors existed about 70 million years ago and it has survived into the present – but without leaving any fossil remains younger than that time. Now, some much older coelacanth remains have been uncovered in a fossil deposit near Bristol by a student at the University of Bristol.

While working last summer in Bristol’s School of Earth Sciences, Harry Allard, a recent graduate from the University of Exeter, found remains of coelacanth fishes, ranging in size from juveniles to adults, in a section of Late Triassic rocks, dated at about 210 million years old, at Manor Farm, Aust, close to the first Severn crossing.

He discovered the new fossils in a large collection of fish and reptile teeth and bones, representing animals that lived in the shallow seas, and on the neighbouring landmass at that time when Bristol teemed with dinosaurs, and the landscape consisted of numerous tropical islands.

Harry said: “These fossils provide an amazing glimpse of an ecosystem which is so different from the contemporary landscape of south west England. It has been fascinating to look at the changing composition of that long-lost ecosystem.”

The Manor Farm site was created 15 years ago when the second Severn crossing was under construction and contractors excavated there to obtain road-building materials.  After the site was made safe, a section was dug out so geologists, and the public, could visit and learn about the local geology. One of the fossil collectors at the time, the late Mike Curtis of Gloucester, collected batches of sediment, and worked through the material to extract nearly 20,000 teeth and bones.

“Mike Curtis kept such excellent records that Harry was able to separate the collections into findings from five separate bone beds, each perhaps separated by a few hundred thousand years,” said Professor Michael Benton, supervisor of the project.  “This provides unique insight into a turbulent time, when seas flooded across the landscape, submerging much of Europe.  Dry land became shallow seas almost overnight, and the energy of the floods churned up the soil and rock below and deposited bone beds in some places.”

Tracking upwards through the five bone beds, Harry was able to show how the fish faunas changed through time, from being dominated by small sharks at first, and then switching to more thick-scaled bony fishes higher up.

“The coelacanths were smaller than the living coelacanth Latimeria,” said Chris Duffin, a fossil fish expert who was involved in the work, “but these fishes were quite diverse in the Triassic, and only dwindled in importance later.  They are most unusual, having gills and lungs, and moving both by paddling with their gills, and stilt-walking along the seabed as well.”