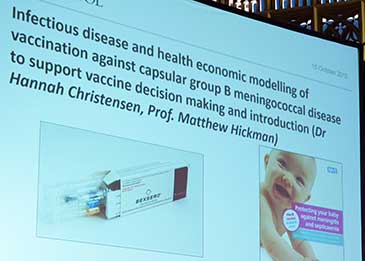 The Vice-Chancellor’s Impact Award this year has been given to Dr Hannah Christensen and Professor Matt Hickman for developing mathematical models that could help prevent infectious disease.

The winning project is entitled ‘Infectious disease and health economic modelling of vaccination against capsular group B meningococcal disease to support vaccine decision making and introduction’. This research was critical to the Department of Health deciding to introduce a new vaccine into the UK immunisation schedule.

This research was funded by a National Institute for Health Research (NIHR) researcher development award.

From September 2015, the UK will be the first country to offer all babies the Bexsero vaccine against group B meningococcal disease, a leading infectious cause of death in infants. Starting in 2007 when the vaccine was in clinical trials, Dr Christensen, working with a team of modellers and epidemiologists, developed new mathematical models to predict the cases which could be averted by introducing the vaccine and estimated the maximum price the Government should pay for the vaccine to provide value for money to the NHS.

From 2011 to 2014, these models were substantially developed as more data became available and the vaccine licensed. In March 2014, the Joint Committee on Vaccination and Immunisation recommended the introduction of Bexsero into the routine infant immunisation schedule in the UK subject to a cost-effective vaccine price, based principally on this modelling work. The strategy chosen was the one from the model developed by Dr Christensen’s team that offered the greatest direct protection at reduced cost. After negotiation between the Department of Health and the manufacturer the vaccine will now be offered to all babies in the UK and will form part of the ongoing national immunisation schedule.

The award was presented at the ceremony for the University’s New Enterprise Competition 2015.