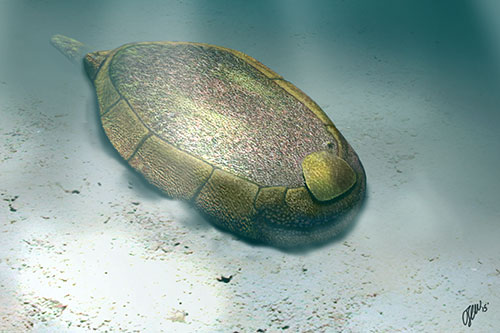 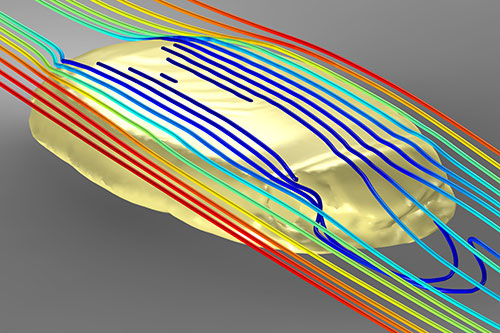 Scientists have used computer simulations to reconstruct feeding in the common ancestor shared between humans and starfish, which lived over half a billion years ago.

The international team of researchers from the UK and Spain, led by Dr Imran Rahman from the University of Bristol, tested competing theories for feeding in a 510-million-year-old fossil using computational fluid dynamics, an engineering tool.

The fossil under study is a ‘primitive’ relative of starfish and sea urchins and belongs to a group of marine animals known as echinoderms.  It is thought to lie close to the base of the echinoderm tree of life.

The results of the computer simulations show that the animal fed by actively drawing water into its mouth using internal gill slits, rather than passively waiting for food to come to it.  Because the fossil represents one of the earliest ever echinoderms, this also suggests that the ancestor of echinoderms and vertebrates employed the same feeding strategy.

The fossil is named Protocinctus mansillaensis and it belongs to an extinct group of echinoderms called cinctans.  It was discovered in rocks from northeast Spain.

Lead author, Dr Rahman, a palaeontologist in Bristol’s School of Earth Sciences said: “Humans and other vertebrates (animals with backbones) are part of a major group known as deuterostomes, which also includes invertebrates such as sea urchins, starfish and acorn worms.  It has been very difficult to work out what the ancestor of all these groups looked like and how it fed because the modern forms are so different from one another. However, by studying one of the earliest fossil echinoderms with the aid of sophisticated methods we have been able to learn more about our ancient ancestry.”

Co-author Dr Samuel Zamora, a researcher at the Geological and Mining Institute of Spain, added: “The application of cutting-edge techniques, like CT scanning and computational fluid dynamics, allowed us to reconstruct the feeding mode of this long-extinct animal for the first time.”

Computational fluid dynamics is a method for simulating fluid flows that is commonly used in engineering, for example in aircraft design, but this is one of the first applications in palaeontology.

Dr Peter Falkingham, also a co-author on the study and a palaeontologist at Liverpool John Moores University, said: “The advantage of using simulation techniques like this is that you can control all of the variables and test things one by one.  We could set up multiple experiments that were identical save for one variable, such as the animal’s orientation, to explore the effects on feeding performance.”

The study is published today in the journal Proceedings of the Royal Society B.

‘Cambrian cinctan echinoderms shed light on feeding in the ancestral deuterostome’ by Imran A. Rahman, Samuel Zamora, Peter L. Falkingham and Jeremy C. Phillips in Proceedings of the Royal Society B