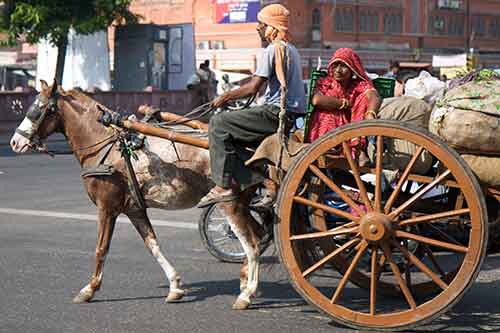 A working horse with its owner in Jaipur, India Dr Becky Whay

New research led by academics from the University of Bristol’s School of Veterinary Sciences have found it is possible for horse owners to make changes that improve the welfare of their animals without threatening their own livelihoods.

Working equids commonly suffer from lameness, often affecting all four limbs at the same time.  The two-year project, led by Dr Becky Whay and funded by global equine welfare charity the Brooke, worked with horse owners in Jaipur, India, to try to reduce levels of lameness in their horses.  The project used participatory methods, which were designed to empower horse owning communities and individuals to find ways of tackling the causes of lameness in their own animals.

The study recruited 439 owners of 862 horses, either as part of an intervention group or a control group.  The results of the project were evaluated in terms of reductions in lameness severity and limb abnormalities in the intervention group compared to the control group. The research team were able to assess these issues on three occasions throughout the two-year study in 149 horses.  The participatory intervention group owners from 21 communities were encouraged to meet regularly to discuss management and work practices influencing lameness and poor welfare and to track their own progress in improving these.

The intervention succeeded in reducing the amount and severity of lameness in the intervention group communities.  This was achieved by owners finding ways to make changes in how they managed and worked their horses and the participatory method used encouraged owners to support each other in implementing these changes.

Dr Whay, Reader in Animal Welfare and Behaviour in the School of Veterinary Sciences, said: “This research is extremely important in that it shows that it is feasible and possible to improve the welfare of animals, despite their owners living in quite profound poverty.

“The key to the project is the use of participatory methods that directly involve the horse owners and put them in control of the changes they make to the management of their animals.  The research team also believe this is the first study of its kind to quantify the impact of a participatory intervention on an animal welfare issue.”

Melissa Upjohn, Research Co-ordinator for the Brooke, added: “The Brooke is an evidence based organisation and we need to understand whether our interventions are effective. It’s studies like this that help us do that. The methods of this study also tie in with the Brooke’s overarching approach  - using community engagement to build owner's skills. We believe that showing people how to care for their animals themselves is the best way to improve working equine welfare in the long-term.”

The study demonstrates that it is possible for horse owners to make changes that improve the welfare of their animals without threatening their own livelihoods, which are fragile at best. The use of participatory intervention methods allowed the horse owners to have control of the changes they made, making this less ‘risky’ in terms of affecting their income and more likely to be sustained over time.

About The Brooke
The Brooke is an international animal welfare charity dedicated to improving the lives of working horses, donkeys and mules. The Brooke believes that animal suffering is preventable and that good animal welfare protects human livelihoods. 100 million working equines are the engines that power the developing world, doing the hardest jobs under the toughest conditions to support the livelihoods of 600 million people. That’s 9% of the world’s population. The Brooke works together with local communities to bring about lasting improvements to the lives of their working animals. With 80 years of experience from 11 different countries, the Brooke reaches more working equines than any other organisation. Last year the Brooke reached over 1.5 million working horses, donkeys and mules, and is on target to reach two million working equines each year by 2016.

1934: the Brooke’s beginnings
On arrival in Egypt in 1930, Dorothy Brooke, the wife of a British cavalry officer, sought out emaciated horses that were used as beasts of burden on the streets of Cairo. These walking skeletons were once gallant war horses serving Britain, Australia and America in the First World War. When the conflict ended in 1918, they were sold into a life of hard labour in Egypt. Her pleas in a letter-to-editor were heard, and with help from the British public, Dorothy raised enough money to buy back 5,000 of the surviving horses. She then went on to set up a free veterinary clinic in Cairo in 1934 – the Old War Horse Memorial Hospital – and the beginning of the Brooke as we now know it.