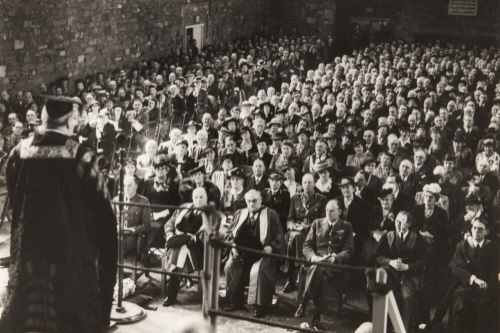 A photo of Winston Churchill addressing a degree congregation in the damaged Great Hall on 21 April, 1946 Special Collections at the University of Bristol 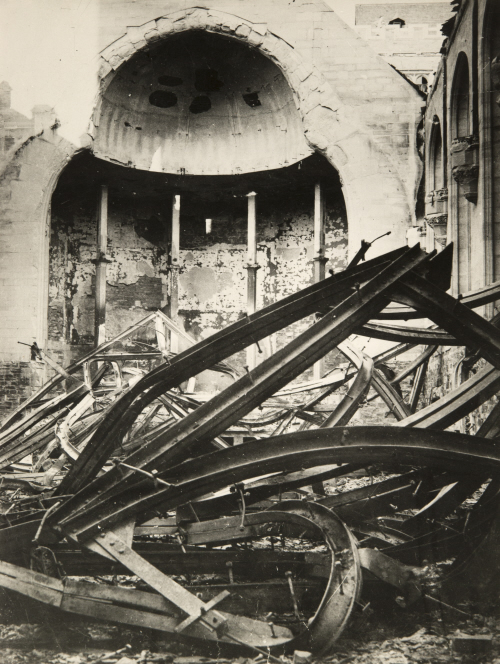 Bristol’s largest bell, housed in the Wills Memorial Building which was badly damaged in the Second World War, will ring out across the city on Saturday as the nation marks the 70th anniversary of VE Day.

Great George will join thousands of bells across the country as part of a simultaneous bell-ringing at 11am to remember the significant moment when the Second World War ended in Europe in 1945.

The University of Bristol has arranged for 9.5 tonne Great George to be rung by a team of bell ringers who swing the bell using its rope and mounted wheel to produce a louder and richer sound than when the clock hammer usually chimes.

Such ringing is saved for special occasions such as the Queen’s Jubilee, royal weddings and the London 2012 Olympics.

The bell’s location is especially poignant given the significant role that the Second World War played in the history of the Wills Memorial Building.

Not only was Sir Winston Churchill the University’s Chancellor from 1929 to 1965, but the Great Hall was destroyed by an incendiary bomb on 24 November 1940 when Bristol suffered its first major raid of World War II. Luckily the iconic tower remained intact.

At the time, the building housed the library of King's College, London, which, ironically, had been moved to Bristol for safety.

Thousands of books were destroyed and, for most of the 1940s and 1950s, the Great Hall was an empty shell, covered with a leaky corrugated-iron roof. The Great Hall wasn’t reopened until 1963 and its stone floor still bears marks where the bomb hit.

On 12 April 1941, after one of the worst bombing raids during the 'Bristol Blitz', Churchill visited the Wills Memorial Building to bestow honorary degrees on John Winant, American Ambassador, and Robert Menzies, the Prime Minister of Australia at the time.

Dismissing smouldering rubble and what turned out to be an unexploded bomb, Churchill insisted that the ceremony go ahead. It was held instead in the smaller but undamaged Reception Room next door. ​

Historian Sir David Cannadine recounted: “The University had not planned to hold honorary degree ceremonies for the duration of the war, but at Churchill’s suggestion they willingly extended invitations and, amidst strict security measures, the visit to Bristol was scheduled to take place in early April.

“The night before, Bristol was subjected to one of the most savage and sustained air raids of the entire war. When Churchill reached the city the following morning, much of it lay in ruins, 200 people had been killed and twice as many were injured.

“Here at the University, the gowns and pageantry were a strange contrast to the smoking ruins just outside. Some professors arrived late, their faces stained and grimy, wearing their academic robes over their still-wet firefighting clothes.

“At the end of his visit, as his train pulled out of Bristol station, one of the Prime Minister’s party noticed that his eyes were full of tears and he picked up a newspaper to hide his face. It was an occasion that Churchill would never forget.”

Sir David Cannadine’s lecture, looking at Sir Winston Churchill and the University of Bristol, is available to hear on Soundcloud.

Great George was cast in 1924 and is reputed to be the finest E-flat bell in Europe and one of the deepest-toned bells in the world. It is the seventh-largest bell in England and is believed to be the third-largest that can be rung by hand. It is 6ft 9” high and 8ft 4” in diameter and can be heard 12 miles away. It is named after George V, George Oatley and George Wills.  You can follow Great George on Twitter @GreatGeorgeWMB.