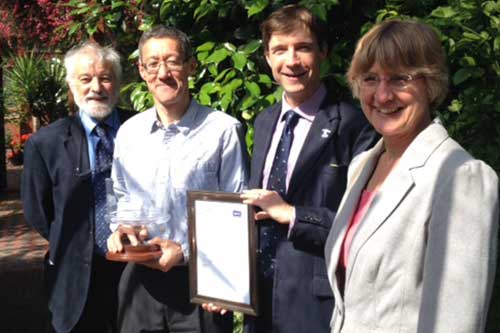 One of the UK’s leading experts on animal behaviour has been presented with a prestigious award in recognition of his contribution to improving animal welfare. Mike Mendl, Professor of Animal Behaviour and Welfare at the University of Bristol, was awarded the RSPCA/BSAS Award for innovative developments in animal welfare last week [Wednesday 20 May].

Presented to scientists who have done considerable work to improve the well-being of animals through their research, Professor Mendl received the award for his work on animal behaviour, cognition, emotion, and personality.

By enhancing our understanding of how animals perceive the world and by developing novel methods to assess animal emotion, Professor Mendl’s work has suggested new ways of tackling welfare issues.

Through his work he has helped the agricultural and research industries make a range of improvements to how farm and laboratory animals are housed and managed.

After graduating with a degree in Natural Sciences and studying for a PhD on mother-offspring relationships at the University of Cambridge, Professor Mendl moved into the fields of applied behaviour and animal welfare.

In 1993 he took up a position as a behavioural scientists at the Scottish Agricultural College in Edinburgh where he worked on pig behaviour and welfare, before moving to the University of Bristol's School of Veterinary Sciences, where he became a professor.

At Bristol his research has focused on studying cognition, emotion, development, individuality and social behaviour in domestic animals including pigs, dogs, rats and sheep.

Together with Dr Liz Paul, Professor Mendl developed a new approach to the assessment of animal emotion - ‘cognitive bias’ - which is now used widely in research on livestock and laboratory animals.

He has also contributed to the livestock industry’s understanding of why animals differ in their responses to welfare challenges, and how abnormal behaviour such as tail-biting in pigs develops.

“His research has enabled animal keepers understand how to look after their stock in a way which benefits their animals’ welfare and ultimately helps their businesses,” he added.

In accepting the award Professor Mendl said he was greatly honoured, and thanked his team and colleagues at Bristol for their support.

“Receiving this unique award from BSAS and the RSPCA will help raise the importance of a deeper understanding of the animal mind in animal welfare research, and lead to a better environment for all animals,” he added.

The judges will be looking for advancement in providing one or more the following freedoms:

About BSAS
BSAS is an organisation which works to improve the understanding of animal science and the ways it can help ensure food is produced ethically and economically.