One step closer to an insulin vaccine for type 1 diabetes 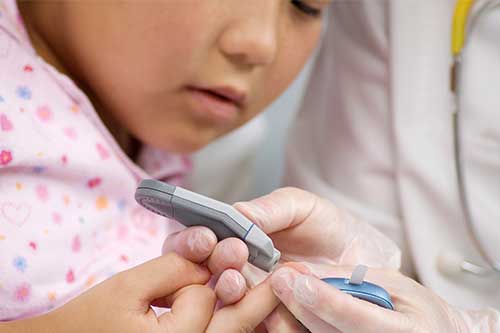 An international team of researchers from Bristol, Dresden, Munich, Vienna and Denver have successfully completed the first step in the development of an insulin vaccine to prevent type 1 diabetes.

The Pre-POINT study has found a positive immune response in children at risk of type 1 diabetes who were given oral doses of insulin.  Adverse reactions such as hypoglycaemia were not observed.  The findings, published in JAMA (Journal of the American Medical Association), support the need for a next phase of testing, which will determine whether an insulin vaccine can prevent the outbreak of the disease over the longer term.

Children with type 1 diabetes require several insulin injections every day of their lives. This is because the body’s own immune system destroys the beta cells in the pancreas – the cells that produce insulin. This is a process that starts early. Instead of ignoring proteins such as insulin, the immune defences see insulin and other proteins in the cells as foreign and mobilise immune cells to destroy the beta cells. Normally, the immune system develops an immune tolerance to the body’s own proteins during the first years of life, therefore preventing this type of autoimmune response. This tolerance includes the training of immune cells that prevent destruction of the body’s own cells. The aim of the insulin vaccine is to help “train” this positive preventive immune response.

In the Pre-POINT study, children at high risk of developing type 1 diabetes in Germany, Austria, USA and the UK were treated with oral insulin once daily over periods averaging half a year. The control group was given only a placebo with no effect. The active substance group ingested the insulin in powder form together with food at varying dosage levels that were increased in the course of the study. In the highest dosage (67.5 mg), the insulin powder then induced the desired immune response.

Professor Ezio Bonifacio from the DFG Research Centre for Regenerative Therapies Dresden, who led the study, said: “We were pleased to see that there were no unwanted side effects and we were able to mimic what normally happens in children who don’t get type 1 diabetes.

“Since insulin in this dosage form is broken down in the stomach it did not influence blood glucose levels.  We believe that most of the response is happening while insulin is still in the mouth.”

Professor Anette-Gabriele Ziegler from the Institute for the Study of Diabetes in Munich explained: “The unique factor about this double-blind study is that the insulin was administered as a prophylactic vaccine to the children before they had developed an autoimmune response – that is before they produced autoantibodies.

“This is a revolutionary way to prevent type 1 diabetes, but it is quite logical that if the body’s immune system doesn’t learn how to make the protective responses by itself, we need to give it a little help.”

Julia Greenstein, JDRF (Juvenile Diabetes Research Foundation) Vice-President of Discovery Research in the USA, which provided supportive funding for the project, added: “The JDRF is very encouraged by the results of the Pre-POINT studyas a first step to potentially prevent type 1 diabetes in children that are at high risk for getting T1D.

“This is a significant finding and given JDRF’s mission to achieve a world without type 1 diabetes, these study results are exciting and bring us one step closer to the potential of seeing an oral vaccination strategy to prevent this disease.“

Polly Bingley, Professor of Diabetes of the University of Bristol’s School of Clinical Sciences, said: “The ultimate prevention of type 1 diabetes is the major research focus of our team in Bristol. With the help of many colleagues throughout the UK, we were able to screen and recruit young children at high genetic risk of type 1 diabetes to this study. The results are encouraging and we hope that they will provide the basis for a larger study in young infants in the future.”

In follow-up studies, treatment will be given to a larger number of babies who are genetically at risk for type 1 diabetes. If the vaccine then succeeds in preventing the disease over the longer term, this would open the door to blanket coverage with the preventive vaccine.