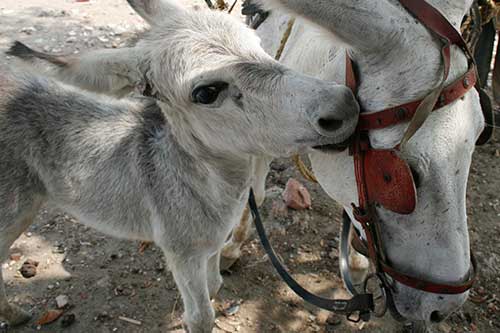 Vets in Pakistan working for global equine welfare charity the Brooke have collaborated with the University of Bristol on a newly published paper to discover whether a donkey is in pain by just being observed.

The research, funded by the Brooke in the UK and carried out by the University’s School of Veterinary Sciences and Brooke Pakistan looked at the proportion of working donkeys in Pakistan that are affected by painful conditions and also investigated behavioural patterns that may help in identifying these conditions. The behaviour of 134 male donkeys was observed before they were examined by Brooke vets.

This is the final paper in a set of three.  The combined findings of these studies can be applied by all those working with donkeys to improve the understanding of donkey behaviour and to improve ways of identifying their welfare needs even when veterinary equipment is not available.

Melissa Upjohn, Research Co-ordinator at the Brooke, said: “Owners and local health providers come into contact with animals affected by conditions that aren’t always easy to diagnose without equipment.  Whilst some conditions, such as the 97 per cent of the donkeys seen had abnormal lung sounds, do require a stethoscope and a quiet area to do an examination, there are other problems, such as the 98 per cent of donkeys that were lame, for which behaviour such as weight shifting and leg lifting may enable them to be identified visually whilst at rest”.

“The Brooke is concentrating on training local service providers and owners so they can better look after their animals, and research like this helps us to make this training both practical and evidence based.”

Dr Becky Whay, Reader in Animal Welfare and Behaviour in the School of Veterinary Sciences, added: “Spotting signs of pain and clinical problems in donkeys is always difficult as they tend to ‘suffer in silence’.  By carefully studying their behaviour we have started to learn how to recognise much more reliably when they are in pain and in need of attention."

The Brooke
The Brooke is an international animal welfare charity dedicated to improving the lives of working horses, donkeys and mules. The Brooke believes that animal suffering is preventable and that good animal welfare protects human livelihoods. 100 million working equines are the engines that power the developing world, doing the hardest jobs under the toughest conditions to support the livelihoods of 600 million people. That’s 9% of the world’s population. The Brooke works together with local communities to bring about lasting improvements to the lives of their working animals. With 80 years of experience from 11 different countries, the Brooke reaches more working equines than any other organisation. Last year the Brooke reached over 1.5 million working horses, donkeys and mules, and is on target to reach two million working equines each year by 2016.

1934: the Brooke’s beginnings
On arrival in Egypt in 1930, Dorothy Brooke, the wife of a British cavalry officer, sought out emaciated horses that were used as beasts of burden on the streets of Cairo. These walking skeletons were once gallant war horses serving Britain, Australia and America in the First World War. When the conflict ended in 1918, they were sold into a life of hard labour in Egypt. Her pleas in a letter-to-editor were heard, and with help from the British public, Dorothy raised enough money to buy back 5,000 of the surviving horses. She then went on to set up a free veterinary clinic in Cairo in 1934 – the Old War Horse Memorial Hospital – and the beginning of the Brooke as we now know it.