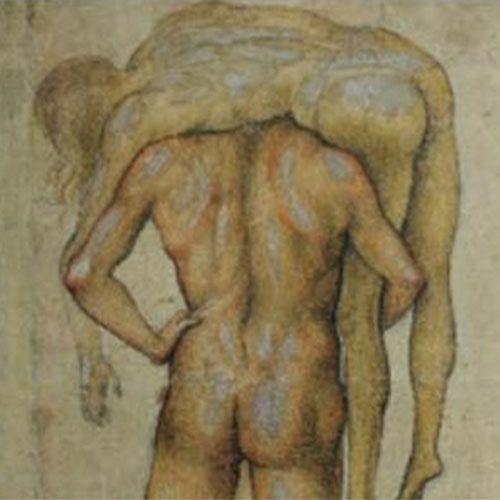 Luca Signorelli (1441-1523) 'Nude Man from the Back Carrying a Corpse on His Shoulders', Louvre, from the cover of 'The Cambridge Companion to the Body in Literature' ©Scala, Florence

The Cambridge Companion to the Body in Literature charts our evolving understanding of the body from the Middle Ages to the present day.

It addresses such questions as sensory perception, technology, language and affect; maternal bodies, disability and the representation of ageing; eating and obesity, pain, death and dying; and racialized and posthuman bodies.

The book also considers science and its construction of the body through disciplines such as obstetrics, sexology and neurology.

With contributions from sixteen leading scholars in the field, the book devotes special attention to poetry, prose, drama and film, and charts a variety of theoretical understandings of the body.

David Hillman is a Senior Lecturer in the Faculty of English at the University of Cambridge, and Fellow and Director of Studies at King's College, Cambridge.  He is the author of Shakespeare's Entrails: Belief, Scepticism and the Interior of the Body and Marx and Freud: Great Shakespeareans.  He is the co-editor of The Body in Parts: Fantasies of Corporeality in Early Modern Europe and of The Book of Interruptions.  He is currently working on a monograph, Greetings and Partings in Shakespeare and Early Modern England.

Ulrika Maude is a Senior Lecturer in Modernism and Twentieth-Century Literature at the University of Bristol.  She is the author of Beckett, Technology and the Body, and co-editor of The Body and the Arts and Beckett and Phenomenology.  She has recently co-edited Beckett, Medicine and the Brain, a special issue of the Journal of Medical Humanities (forthcoming, 2015).  Dr Maude is also a member of the editorial board of the Journal of Beckett Studies and has contributed to such journals as Modernism/Modernity and European Joyce Studies.

The Cambridge Companion to the Body in Literature edited by David Hillman and Ulrika Maude is published by Cambridge University Press £17.99