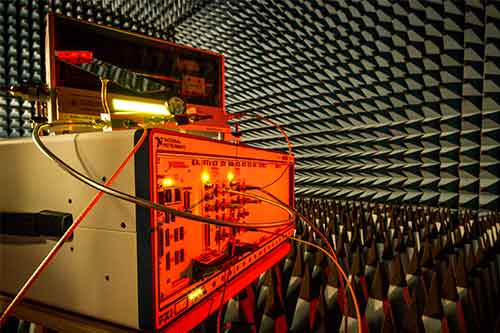 Radio systems, such as mobile phones and wireless internet connections, have become an integral part of modern life. However, today’s devices use twice as much of the radio spectrum as is necessary. New technology is being developed that could fundamentally change radio design and could increase data rates and network capacity, reduce power consumption, create cheaper devices and enable global roaming.

A pioneering team of researchers from the University of Bristol's Communication Systems and Networks research group, have developed a new technique that can estimate and cancel out the interference from one’s own transmission, allowing a radio device to transmit and receive on the same channel at the same time. This therefore requires only one channel for two-way communication, using half as much spectrum compared to the current technology.

Leo Laughlin, a PhD student from the University’s EPSRC Centre for Doctoral Training (CDT) in Communications, together with MSc student Chunqing Zhang, supervisors Professor Mark Beach and Dr Kevin Morris, and industrial mentor, Dr John Haine at u-blox, have designed and built a novel full-duplex transceiver architecture, which combines electrical balance isolation and active radio frequency cancellation. Their prototype can suppress interference by a factor of over 100 million and uses low-cost, small form factor technologies, making it well suited to use in mobile devices such as smartphones and tablets.

This important change in radio design could offer a range of benefits. In Wi-Fi systems this would double the capacity of a Wi-Fi access point, allowing more users and higher data rates. For cellular systems, full-duplex operation would also deliver increased capacity and data rates, or alternatively the network operators could provide the same total network capacity with fewer base station sites, giving obvious benefits in the cost and environmental impact of running the network.

Leo Laughlin, who is in the first cohort of students in the CDT in Communications, said: “Until now there has been a fundamental unsolved problem with radio communication.  Since the radio spectrum is a limited resource, and with network operators paying billions of pounds to access the spectrum, solving this problem would bring us one step closer to the faster, cheaper and greener devices of our connected future.”

As well as being part of the evolution to 5G mobile, this research is also very relevant to the design of the radio circuitry in current 3G and 4G cellular mobile devices.  In today’s mobile devices, a separate filtering component is required for each frequency band, and because of this, today’s mobiles phone do not support all of the frequency channels which are in use across the world. Different devices are manufactured for different regions of the world, and there are currently no 4G phones capable of unrestricted global roaming. Replacing these filters with the research team’s duplexer circuit would create smaller and cheaper devices, and would allow manufacturers to produce a single model for the entire world. This would enable global roaming on 4G and would further decrease cost through greater economies of scale.

Mark Beach, Professor of Radio Systems Engineering, commented: “In addition to EPSRC’s investment in Doctoral Training Centres at Bristol, we have also been awarded equipment funding. Leo and Chunqing have taken full advantage of the new laboratory facilities in the validation and optimisation of our full-duplex architecture.”

The team have published papers about their research in the IEEE Journal on Selected Areas in Communications special issue on full duplex radio, and in this month’s issue of the IEEE Communications Magazine, and patents have been filed to protect the novel duplexer design.

About radio systems
The signals which are transmitted from a radio device such as a mobile phone, are billions of times more powerful than the signals the device is trying to receive, for example from the base station. If transmitting and receiving on the same channel at the same time, the signal trying to be received is obscured “drowned out” by its own transmission.

Current radio systems achieve two-way communication by simply avoiding this problem, and using separate channels for transmitting and receiving signals. Using two channels to provide two-way communication requires twice as much spectrum. An analogy would be requiring the use of two telephone landlines to have one telephone conversation – it would seem quite silly to have a separate phone lines for each direction, but this is exactly what happens in today’s wireless systems.

About the EPSRC Centre for Doctoral Training (CDT) in Communications
The EPSRC CDT in Communications at the University of Bristol received its first intake in 2011.  The CDT will host 80 new PhD students over eight intake cycles. As well as producing innovative solutions to key emerging research challenges, the Centre is helping to provide a coherent advanced training network for the communications community nationally, and develop the skilled and entrepreneurial engineers needed to underpin the future of the industry.

About u-blox
Swiss u-blox (SIX:UBXN) is a global leader in positioning and wireless semiconductors and modules for the automotive, industrial and consumer markets. Our solutions enable people, vehicles and machines to locate their exact position and communicate wirelessly over cellular and short range networks. With a broad portfolio of chips, modules and software solutions, u-blox is uniquely positioned to empower OEMs to develop innovative solutions for the Internet of Things, quickly and cost-effectively. With headquarters in Thalwil, Switzerland, u-blox is globally present with offices in Europe, Asia and the USA.