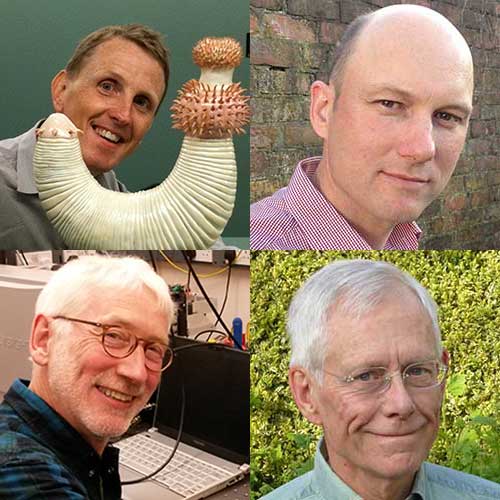 Philip Donoghue, Professor of Palaeobiology, researches the relationship between evolution and embryology, integrating living and fossil organisms, genetics, developmental biology and knowledge of their evolutionary relationships to provide a holistic understanding of major episodes in evolutionary history.  His particular interests are in the evolutionary emergence of vertebrates, animals and plants.

Jens Marklof, Professor of Mathematical Physics, works in the areas of dynamical systems, statistical mechanics, quantum chaos, ergodic theory and number theory.  He is best known for the proof of the Berry-Tabor conjecture in quantum chaos for an important class of integrable systems and, in joint work with Andreas Strömbergsson, the resolution of a century-old problem in statistical mechanics concerning the Boltzmann-Grad limit of the periodic Lorentz gas.

John Rarity, Professor of Optical Communications Systems, pioneered the experimental one-photon and two-photon optics, both to the study of fundamental physical phenomena and also in the development of prototype devices.  He has made leading advances to detector design and was, with his collaborators, for many years the sole UK representative in experimental quantum optics, his research telling us much about the nature of photons.  He spotted early the potential for experimental quantum information and has become a leading figure in this field.

Alan Roberts, Emeritus Professor in the School of Biological Sciences, studies the central nervous system of very young Xenopus tadpoles to try to understand how the animal’s simple swimming behaviour arises.  He is interested in the overall organisation of neuronal control systems and the cellular and synaptic properties that underlie them.

Professor Sir Eric Thomas, Vice-Chancellor of the University of Bristol, said: “To be elected a Fellow of the Royal Society is a great accolade.  I am delighted that four Bristol researchers have achieved this recognition of their outstanding contributions to science.

“Election to the Royal Society not only reflects the scientific excellence of these individuals, but also of their Schools, their Faculties and the University.  To have so many colleagues elected in one year is an exceptional achievement.”

The Fellowship of the Royal Society is made up of the most eminent scientists, engineers and technologists from the UK and the Commonwealth. Past Fellows and Foreign Members have included Isaac Newton, Charles Darwin and Albert Einstein.

Fellows of the Royal Society are elected for life and designate themselves through the use of the letters FRS after their names.  This year 57 new Fellows and Foreign Members were elected.

The University of Bristol has 28 Fellows of the Royal Society among current staff, and 16 among its emeritus professors.