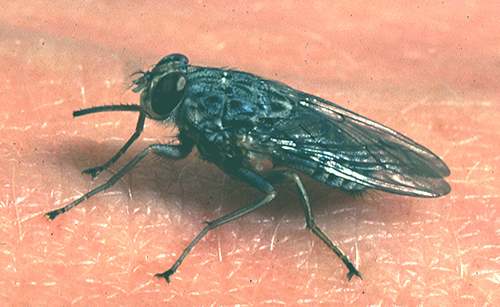 New strains of the human pathogen responsible for African sleeping sickness can arise by swapping genes between human and animal variants of the parasite, new research from the University of Bristol has found.

African sleeping sickness is a fatal disease caused by parasitic, single-celled microbes called trypanosomes.  The disease gets its name from the terminal stage when the trypanosomes invade the brain and cause the patient to become comatose.  In Africa, trypanosomes also infect animals, causing a wasting disease – Nagana – that has devastated livestock production in many regions.

Both human and animal trypanosomes are transmitted from host to host by the same bloodsucking tsetse flies.  This potentially allows mating and exchange of genes to occur between the human and animal parasites inside the fly, leading to the generation of new strains not previously encountered by either humans or animals.

The Bristol team used different coloured fluorescent markers to genetically tag trypanosomes of human or animal origin.  These red and green parasite lines were then allowed to mix inside tsetse flies.  Any hybrid offspring were easily detected, because they fluoresced both red and green.

Such recombinant pathogens can be dangerous as we have no previous immunity to them and present a risk for future outbreaks of disease.  For example, a similar exchange of genes between human and animal influenza viruses is believed to have caused the 1918 Spanish flu pandemic and the more recent 2009 swine flu outbreak.

Professor Wendy Gibson, who led the research, said: “These new results show that sex in trypanosomes really matters, because transfer of just this single gene can produce new strains capable of infecting humans.”

The study was carried out by researchers from Bristol’s School of Biological Sciences and School of Veterinary Sciences and was published in the open access journal PLoS Neglected Tropical Diseases.