‘Incredible honour’ for Simon Pegg as he opens new theatre 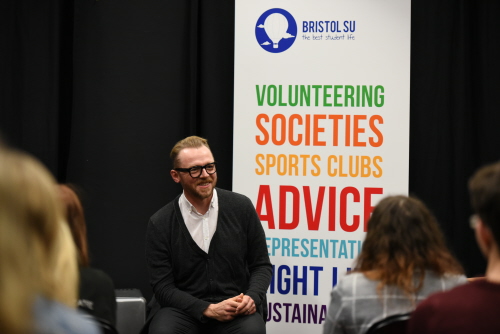 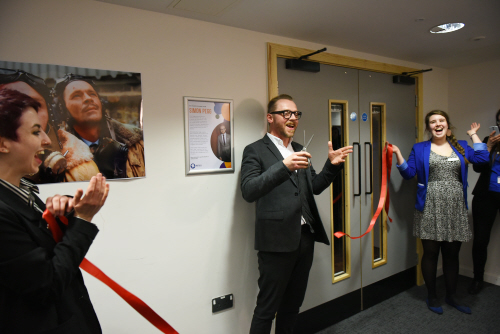 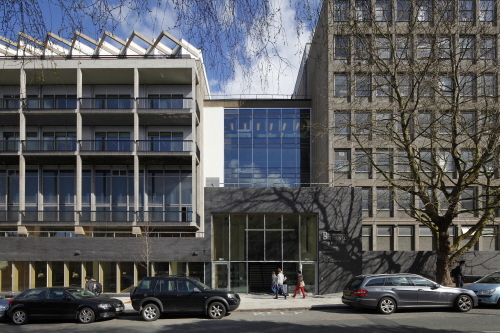 The exterior of the Richmond Building, home to Bristol SU Liz Eve/fotohaus

After conquering zombies, aliens and Hollywood, Simon Pegg has returned to the university where he first learnt his trade.

Students voted to name a new theatre after the famous alumnus, who studied Theatre, Film and Television at the University of Bristol, graduating in 1991 before becoming a household name through comedy series Spaced and blockbusters including Shaun of the Dead, Hot Fuzz and The World's End.

The actor, comedian and writer paid a whistle-stop visit to the newly refurbished Richmond Building, home to the University of Bristol's Students' Union, which has undergone a £30 million transformation over the last five years.

After meeting drama students for a question and answer session, Pegg paid a visit to The Balloon café bar which has been transformed from the ‘grimy’ bar he remembered.

He said: "I used to come here to see bands and drink beer out of a plastic cup for 70p a pint! It's changed enormously and is so much nicer now.

"It's an incredible honour to have a theatre named after me, I was very touched when I found out. I’ve found it hard to recognise much of the building - it's changed so much - yet it feels familiar. It used to just smell of beer and students but it’s been so beautifully changed and modernised."

Students voted to name the new theatre ‘The Pegg Studio Theatre’ in honour of the star, whose dissertation looked at how Marxist modes of critical theory could be applied to Star Wars.

Pegg added: "I feel like Bristol University is the place that galvanised the decisions I’ve made and it’s somewhere that will always be very special to me. The whole higher education part of your life is a very formative time. It’s a privilege to be in that environment.

"It 100 per cent shaped my career. This is the mould I came from. It was so important not just in terms of my academic life but my personal life. I wouldn't change a thing. It was an incredible thing to discover that education could be so enjoyable. It wasn't easy, and required an incredible amount of work, but it was all worth it.

It's ace to be back in this part of the world - I've obviously got a huge affection for it. Bristol itself will always be of great sentimental value to me."

The building itself was officially reopened by the Right Honourable the Baroness Hale of Richmond, Chancellor of the University.

The Invisible Circus later took over the building for an evening of entertainment as 2,000 students celebrated their new Students Union.

Sam Budd, Chief Executive of the University of Bristol's Students' Union, said: "We're so pleased to be able to open this space to our 22,000 students. Our 250 sports clubs and societies can only benefit from the world-class facilities we have and this will place the Students' Union at the heart of university life for students while they are in Bristol."

The Richmond Building was built in 1965 and remains one of the largest purpose-built students’ union buildings in the UK, with a floor area equivalent to nearly four full-size football pitches.

The original building was designed to meet the pastoral, recreational and social needs of an expanding student population living away from home. Hence the original design included large meeting rooms, television and games rooms, a barber, a bakery, dining rooms and bars, a proscenium theatre and a swimming pool.

Now, exactly 50 years later, the building has undergone a complete overhaul to meet the needs of modern-day students and be more energy efficient thanks to the work of architects Feilden Clegg Bradley, who are pioneers of sustainable architecture.

For example, by replacing the old swimming pool air handling plant with a new heat recovery system, it’s estimated that 116 tons of carbon emissions are being saved per year, reducing pool running costs by more than £14,000 in that period.

Not only has the concrete exterior been enhanced, the interior has been completely remodelled and it’s now a sustainable building fit for the future, with improved natural lighting, ventilation, sound insulation and better disabled access.

It's a very rare example of a 1960s building being renovated to a BREEAM Excellent environmental standard.

Moss is even growing in the interior walls of The Balloon café bar and a ‘brown roof’ has been created on the new extension roof from local flora, recycled aggregate and felled timber.

Professor Sir Eric Thomas, Vice-Chancellor of the University of Bristol, said: “We have always been very lucky to have such a large Students’ Union building, with so many facilities under one roof, but it was looking tired and we were keen to bring it into the 21st Century.

“Staff and students have been very patient during the transformation but everyone agrees that it has been well worth the effort and upheaval. It is now an exciting hub of activity and a place which our students can be proud of for years to come.”

Follow the day on social media using the #lovebristolsu hashtag or check out the Tagboard.

Simon Pegg is one of a number of famous faces who studied TV, Theatre and Film at the University of Bristol. Other well-known names include Emily Watson, David Walliams, Matt Lucas, Derren Brown, Michael Winterbottom, Greg Doran, Charlotte Richie and Miranda Krestovnikoff.

Other rooms and conference facilities have been named by the students after well-known Bristol figures: