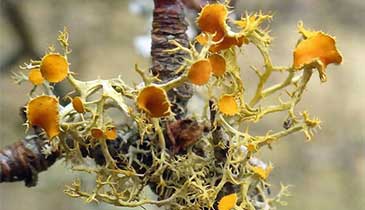 A rare, bright yellow lichen, which until recently was believed to be extinct in the UK, has been found by University of Bristol postgraduate students during a recent field trip to South Wales.

The MSc students, together with their lecturer Dr Paul Smith, discovered the Golden-eye lichen (Teloschistes chrysophthalmus) whilst they were studying the ecology of coal waste in Glamorgan.  The find was confirmed by Professor Mark Seaward of the British Lichen Society following identification from a photograph.

The University team were examining bryophyte and lichen communities on the restored spoil heaps at Dare Valley Country Park in Aberdare. Dr Smith, a professional botanist who teaches at the University, was training the students in the techniques of detailed field observation when postgraduate student, Emma Burak, noticed an unusual specimen. This led to the discovery of a new species record for Wales.

Emma Burak, an MSc Water and Environmental Management student, who found the lichen, said: “I have spotted four-leaf clovers in the past but never a rare lichen.  During our field trip Paul stopped to point out some lichen on a tree. I was at the back of the group and studied a less crowded part of the tree, which was where I spotted a species I had never seen before - the Golden-eye lichen.  It’s very exciting but it has taken me some time to learn its proper name.”

Tim Wilkins, lichen and bryophyte co-ordinator at Plantlife, added: “This is a wonderful discovery! We’ve been hoping it would turn up in Wales. It just goes to show what can be achieved through surveys of less well-known habitats.

“In 2005, Golden-eye was thought to be extinct in the UK but two years later it appeared in a Herefordshire orchard. Since then it has popped up in various places along the south coast. We're not sure why it is coming back but cleaner air and climate change are the most likely explanations.”

Coal waste is known to support unusual collections of animals and plants. This is a result of its complex geology that includes discarded limestone, sandstone, coal fragments and heavy metals. Tragedies such as the landslide at Aberfan in the 1960s inevitably led to a negative opinion of the industrial valley landscapes.

However, work at places like Dare Valley Country Park has shown what can be done with this material and the great species diversity that thrives upon it when suitable ecological management regimes are established. The restoration of ecosystems and the healing of human communities are closely linked and South Wales is becoming a showcase for such work.

Bryophytes, lichens and other species often co-exist in complicated relationships and researchers are still learning how they interact and may be used in habitat repair.

Sue Townsend, Biodiversity Learning Manager at the Field Studies Council, said: “Fieldwork skills such as those taught on Bristol’s course, are vital for the continuing monitoring of our environment.  It is fabulous to see a small and potentially overlooked species being picked up, recognised and verified by national experts and it demonstrates the importance of getting into the outdoors and not relying on virtual fieldwork.”

Dr Nicholas Howden, Director of the University’s MSc Water and Environmental Management Programme, added: “Bristol is one of only a few academic institutions teaching water and environmental management. The University’s Department of Civil Engineering has recognised that the global environmental problems faced by humanity today require multiple collaborations between engineers and ecologists. The repair of damaged landscapes and the challenges of global ecosystem restoration called for by the United Nations Aichi Targets allow for nothing less.”

Dr Paul Smith is a freelance botanist and visiting fellow in the University of Bristol’s Department of Civil Engineering.

He divides his professional life between teaching students applied ecology and working with other clients to solve environmental problems involving ecological mitigation and the translocation of endangered plant and fungal species.