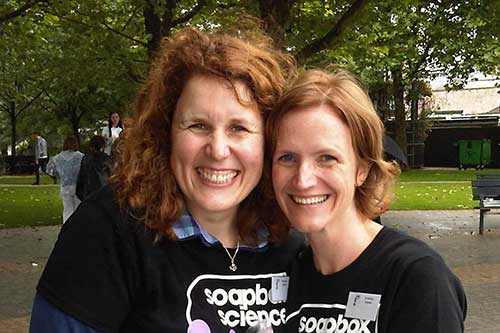 A pair of inspirational female scientists who founded an initiative that takes science out of the labs and highlights the work of women in cutting edge research have been named Points of Light by Prime Minister David Cameron.

Dr Seirian Sumner, a senior lecturer in behavioural biology at the University of Bristol, and Dr Nathalie Pettorelli, a research fellow at the Institute of Zoology, are the latest recipients of the award which recognises outstanding individual volunteers, people who are making a change in their community and inspiring others. Each day, someone, somewhere in the country is selected to receive the award to celebrate their remarkable achievements.

Passionate believers in the need for more positive and inspirational female role models in science, Dr Sumner and Dr Pettorelli founded Soapbox Science, an initiative which brings science to the streets, making it accessible to everyone, and works with the UK’s top female academics to make women in science more visible.

Now in its fifth year, Soapbox Science, is bigger than ever with seven events across the UK, involving more than 90 female scientists, including Dame Athene Donald, a Fellow of the Royal Society; Professor Lesley Yellowlees, first female president of the Royal Society of Chemistry, and Professor Georgina Mace, who was instrumental in developing the criteria for listing species in the IUCN Red List.  So far this year, over 10,000 people have attended free public lectures about science in public places from London’s Southbank to Belfast’s Botanic Gardens.

Prime Minister David Cameron said: “Through Soapbox Science, Seirian and Nathalie have inspired scores of leading female scientists from around the country to get out onto the streets and encourage girls to learn more about the opportunities open to them through science.  It’s so important that girls feel as able as boys to pursue a career in science.  And it’s great that thousands of people can look to Seirian and Nathalie as role models.  I am delighted to recognise them both by making them Points of Light.”

Dr Sumner said: “Inspiring the next generation of scientists is not just about getting kids hooked on science, it’s also about convincing their families and friends that science is important and amazing, and that a career in science is a valuable and rewarding career path to follow.  Soapbox Science aims to bring science to every facet of society, with a special emphasis on providing inspirational women in science as role models.”

Dr Pettorelli said: “We’re trying to show that science is more than labs, microscopes, computers – it’s also about meeting people, working in teams, solving questions that can benefit society, creating, and being open minded about how things work and how they might work in the future.”

Soapbox Science will reach even more people this summer by adding its first session in Newcastle this Saturday, 27 June from 1-4pm around the Monument area in central Newcastle, featuring a team from Newcastle University.