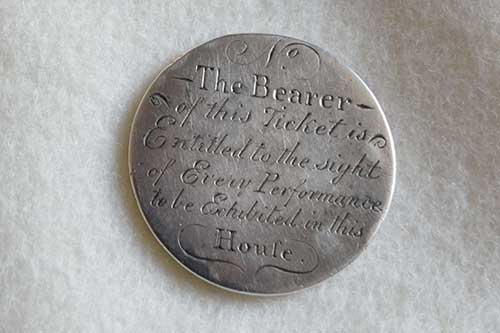 The ‘gold’ ticket (one of only two issued) is actually made of silver and is very similar to the 50 silver tickets except it has the word ‘Bearer’ rather than ‘Proprietor’ on it and is not numbered. Bhagesh Sachania 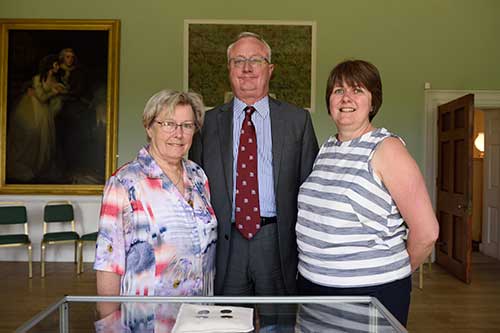 Four silver tokens issued to shareholders and a supporter who assisted in the founding of Bristol Theatre Royal (now Bristol Old Vic) in 1766 have come home to Bristol. They were donated to the University of Bristol Theatre Collection this week by eighty-three-year-old Geraldine Menez, whose great-grandfather, Henry Augustine Forse, was involved in the re-modelling of the theatre in 1902.

The tickets donated by Mrs Menez are accompanied by histories of their previous ownership, such as a bill of sale for one silver ticket at a cost of £20 dated 20 September 1855, and also include one of only two 'gold' versions ever issued.  They will join the five silver tickets already held by the Theatre Collection, which is also home to the Bristol Old Vic Archive.

Fifty of the ‘tickets’ were originally awarded in the 1760s to the fifty proprietors who each pledged £50 towards the cost of building a new theatre in King Street.  This was at a time when a low paid domestic servant earned £2 a year and an entire family household could be run on £40 per year.

The tickets took the form of a silver token, numbered between 1 and 50, which entitled the proprietor “to the sight of every performance to be exhibited in this house” – a promise the theatre honours to this day.

In 1766, two so-called ‘gold’ bearer tickets were also issued to Edward Crump, a cabinet maker, and his wife Ann.  The Crumps were not shareholders, but were given the special bearer tickets for “the great trouble and expense” that Crump had gone to in order to persuade others to make over the land on which the theatre was built.  The whereabouts of these ‘gold’ tickets (which are actually made of silver and very similar to the 50 shareholder tickets) has been unknown – until now.

Mrs Menez also donated the hand-drawn plans for the re-modelling of the frontage of the theatre in 1902, carried out by her great-grandfather, the builder, Henry Forse.  These plans provide important information about parts of the theatre that were demolished in the 1970s.  Forse was passionate about the theatre and it was he who collected the four tickets and other historic documentation and handed it down through his family.

At a celebratory lunch for Geraldine, hosted by Professor Sir Eric Thomas, Vice-Chancellor of the University of Bristol at Royal Fort House, two new awards were announced to honour her gift to the Theatre Collection.  Though the silver tickets themselves are now too precious to use, in the spirit of the original agreement, each year a Bristol student who has shown outstanding engagement with the archives will be given a certificate that entitles them to free admission to all major Bristol Old Vic productions.  A member of Bristol Old Vic’s Adult Company will also receive the same annual award, with the first winners to be announced in Autumn 2015.

Peter Leppard, an historian who has carried out a significant body of research on the history of the silver tickets said: “This is very exciting as we now know of the existence of twenty silver tickets and at long last one of the two ‘bearer’ tickets which were last recorded in use in 1835.  Any one of these tickets is a tangible link with someone who in 1766 contributed to building our theatre.  Geraldine's donation really does fill important gaps in our knowledge of the history of the theatre.”

Geraldine Menez said: “I am giving the collection of silver tickets to the Theatre Collection in happy memory of ‘the Gods’.  My ancestors are like gods to me, as were the actors I beheld and listened to in awe at the Theatre Royal when I was younger on the frequent occasions I sat somewhere up in the dizzy heights just beneath the theatre ceiling on those hard, narrow wooden benches!”

Jo Elsworth, Director of the University of Bristol Theatre Collection, said: “We are delighted that such an important piece of Bristol’s theatrical history has returned to its home city, thanks to Geraldine’s most generous donation.”

Geraldine’s gift comes as the Bristol Old Vic team gears up its fundraising efforts in order to complete the major redevelopment of the theatre which it aims to start during its 250th anniversary next year.

Tom Morris, Bristol Old Vic Artistic Director, says: “Meeting Geraldine, with her strong personal connections with and affection for the theatre really brings home the incredible history of the Bristol Old Vic.  It has survived for nearly 250 years due to the commitment of its supporters and by adapting to changes in society and we are working hard to raise the funding we still need to make it fit for a new era in its illustrious history.”

The Theatre Collection is one of the world’s largest archives of British theatre history and Live Art and is an accredited museum and international research facility open to all.  Founded in 1951 to serve the first UK university drama department, its collections cover the period from 1572 to the twenty-first century and its visitors include everyone from international scholars to family historians.

Since 1951, the Theatre Collection has expanded to become a fully accredited museum and theatrical research centre.  It also continues to serve its original purpose as a research resource for members of the University of Bristol and the Bristol community.