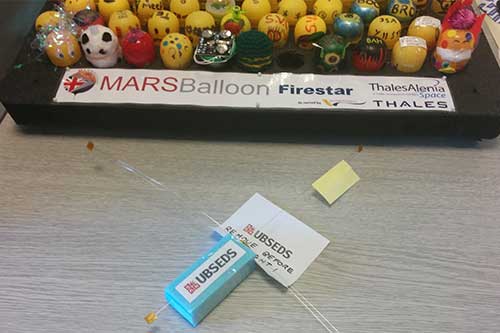 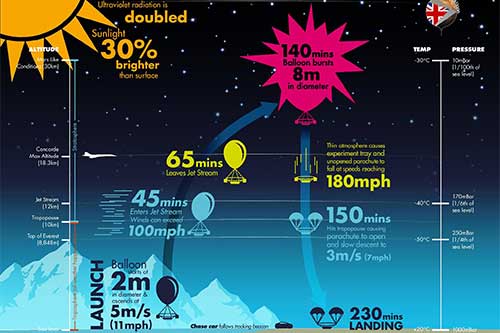 Students from the University of Bristol are involved in the latest MARSBalloon mission, known as Firestar that will be floating into the Earth’s atmosphere today [Wednesday 17 June].

MARSBalloon is a project open to all UK schools to send science experiments into the stratosphere on a high-altitude balloon. The project is run by a group of engineers at Thales Alenia Space UK based in Bristol and one of the founders of the project is University of Bristol alumnus Mike Guest (MSc 2003).

Around 80 experiments have been sent in by over 40 primary and secondary schools from across the UK, including Abbeywood Community School, in Kinder Egg™ capsules. An experiment tray containing the capsules will be lifted 30 kilometres into the atmosphere beneath a helium weather balloon launched from the Mendip Hills near Bristol.

It is estimated that Firestar will fly for two hours and based on current weather predictions will land somewhere west of the New Forest, with the experiments descending by parachute. The conditions during the flight will be similar to those on the surface of Mars, allowing pupils to test anything that might be required for future Martian missions.

The GPS tracker, which will be used on the flight, was designed and built by engineering and physics students specifically for use on stratospheric balloon flights.

Richard Meadows, Treasurer of the University’s Student for the Exploration and Development of Space society (UBSEDS) and a 3rd year electrical and electronic engineering student, said: “To achieve the smallest design possible we built a lightweight, long-range GPS tracker using electronic components normally found in smartphones. During the flight the signal from the tracker can be received from over 300 kilometres away using amateur radio equipment.”

The GPS tracker, funded by a grant from the Alumni Foundation, has been tested on previous balloon flights run by UBSEDS.

The tracker unit used will ensure the science experiments are located at the end of the flight and can be safely returned to the schools. The tracker will also be able to operate for at least 12 hours, giving the MARSBalloon team plenty of time to locate the experiment tray.

Data received from the tracker will be uploaded live to the internet during the flight and people can follow it live at http://tracker.habhub.org/#!qm=All&q=UBSEDS7.

Sponsorship opportunities with the University of Bristol Student for the Exploration and Development of Space society (UBSEDS) are available. To find out more, please contact Richard Meadows on bristolseds@gmail.com, or go to http://www.bristol-seds.co.uk.