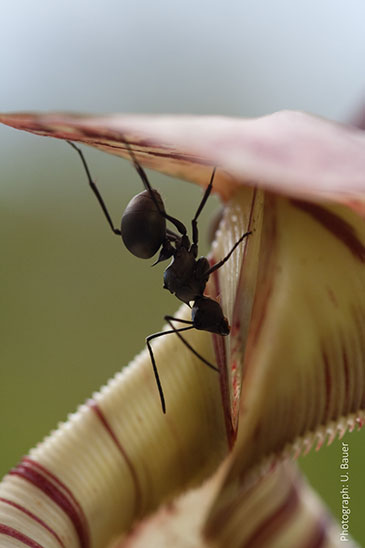 A worker ant collects sweet nectar from the trap of an insect-eating Nepenthes pitcher plant. By 'switching off' its traps for part of the day, the plant ensures that 'scout' ants survive and are able to lead large numbers of followers to the trap. When the trap gets wet, it suddenly becomes super-slippery and captures all visitors in one sweep. Dr Ulrike Bauer

Dr Bauer said: “The plant’s key trapping surface is extremely slippery when wet but not when dry.  For up to eight hours during dry days, these traps are ‘switched off’ and do not capture any of their insect visitors.  At first sight, this is puzzling because natural selection should favour traps that catch as many insects as possible.”

“Ants are social insects,” Dr Bauer explained.  “Individual ‘scout’ ants search the surroundings of the nest for profitable food sources.  When they find a pitcher trap full of sweet nectar, they go back to the colony and recruit many more ant workers.  However, a trap that is super-slippery all the time will capture most of these scout ants and cut off its own prey supply.”

The researchers found that ant recruitment was impeded when the traps were continually kept wet.

Dr Bauer said: “By ‘switching off’ their traps for part of the day, pitcher plants ensure that scout ants can return safely to the colony and recruit nest-mates to the trap.  Later, when the pitcher becomes wet, these followers get caught in one sweep.  What looks like a disadvantage at first sight, turns out to be a clever strategy to exploit the recruitment behaviour of social insects.”