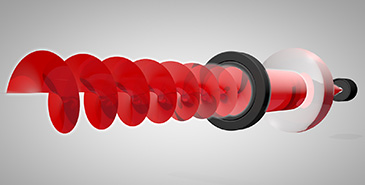 A team of engineers has developed a new acousto-optic device that can shape and steer beams of light at speeds never before achieved. The new technology will enable better optical devices to be made, such as holographs that can move rapidly in real time.

The array consists of 64 tiny piezo-electric elements which act as high frequency loudspeakers. The complex sound field generated deflects and sculpts any light passing through the new device. As the sound field changes, so does the shape of the light beam.

Professor Drinkwater from the Department of Mechanical Engineering said: “This reconfigurability can happen extremely fast, limited only by the speed of the sound waves.  The key advantage of this method is that it potentially offers very high refresh rates - millions of refreshes per second is now possible. This means that in the future laser beam-based devices will be able to be reconfigured much faster than is currently possible.  Previously, the fastest achieved is a few thousand refreshes per second.”

The advancement will enable reconfigurable lenses that can automatically compensate for aberrations allowing for improved microscopy and a new generation of optical tweezers that will make them more rapidly reconfigurable and so allow better shaped traps to be produced.

Dr Mike MacDonald, Head of the Biophotonics research group at the University of Dundee, explained: “What we have shown can be thought of as a form of optical holography where the hologram can be made in real time using sound.  Previous attempts to do this have not had the level of sophistication that we have achieved in the control of our acoustic fields, which has given us much greater flexibility in the control we have over light with these devices.

“The device can potentially be addressed much more quickly than existing holographic devices, such as spatial light modulators, and will also allow for much higher laser powers to be used.  This opens up applications such as beam shaping in laser processing of materials, or even fast and high power control of light beams for free space optical communications using orbital angular momentum to increase signal bandwidth, as shown recently by a demonstration in Vienna.”

Professor Drinkwater added: “The number of applications of this new technology is vast.  Optical devices are everywhere and are used for displays, communications as well as scientific instruments.”

The capabilities of laser beam shaping and steering are crucial for many optical applications, such as optical manipulation and aberration correction in microscopy. Depending on specific requirements of each application, these capabilities are currently achieved using different methods which are based on establishing a certain level of control over the phase of the laser beam. Deformable mirrors are used for aberration corrections in astronomy and spatial light modulators (SLMs) are the common choice in a wide range of applications such as holography, optical tweezers and microscopy.

The work was performed at the universities of Bristol and Dundee. Grinenko, Courtney, Wilcox and Drinkwater from Bristol; MacDonald, Demore and Cochran are at Dundee.

Courtney is now at the University of Bath and Grinenko is now at COMSOL, a company that provides software solutions for multiphysics modelling.