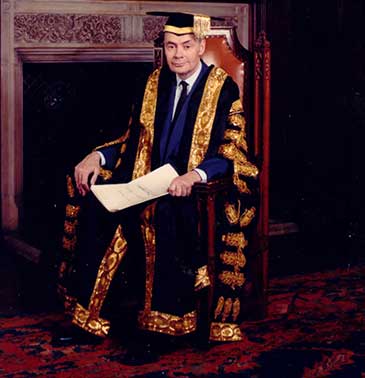 When Dorothy Hodgkin announced that she would retire as Chancellor in 1989, the University decided to seek a successor who would be a person of genuine intellectual depth, but who had also achieved real distinction in a field quite different from the academic. This was an ambitious goal, but when we found Jeremy Morse we knew we had succeeded. Sir Jeremy had no previous link with Bristol, but he accepted and was installed as Chancellor on the 80th anniversary of the granting of the University’s Charter. He remained in office until 2003, and proved to be a splendid holder of the office and a great friend of the University.

Jeremy came of a dynasty of Norfolk brewers, and was educated at Winchester College and New College Oxford. There he was outstandingly successful, head boy of the school and excelling in all subjects but particularly in classics. At Oxford he read Greats, and set a record by winning five of the seven major university classical prizes. He was elected a Fellow of All Souls in 1953.

His interests were anything but narrow. He would like to have been a poet, and had a particular affinity with T.S. Eliot (another, but humbler, employee of Lloyds Bank). He was fascinated by mathematics, and a standard textbook on the theory of numbers has a footnote thanking Mr C.J. Morse for pointing out an error in an earlier edition*. He later became an international judge of chess problems and wrote a learned book on them.

Clearly the young Morse could have chosen an academic career, but he expected to have to run the family brewery, and to prepare himself for commercial life joined the banking firm of Glyn, Mills & Co. The call to be a brewer never came, because the family company merged with a larger group, and Jeremy found banking an agreeable and challenging occupation. He quickly established a reputation, and was headhunted at the age of 36 as an executive director of the Bank of England. This involved him in the work of the International Monetary Fund (IMF), and he later led international discussions aimed at creating a more stable banking environment; for this he was made KCMG in 1975.

Sir Jeremy was widely regarded as a potential governor of the Bank of England, or a possible director of the IMF, but he preferred the world of domestic banking, and became first Deputy Chairman and then in 1977 Chairman of Lloyds Bank. Under his leadership Lloyds became a highly successful high street bank, and Sir Jeremy will be remembered as one of the last of the bankers who put honest dealing and long-term strategy before short-term greed.

This was the man the University welcomed as the holder of its highest office. Its public duties he fulfilled with style and panache. Tall and a little stooped, he had a stage presence in the Chancellor’s robe on the platform of the Great Hall. Although his speeches at graduation ceremonies varied little, they came across as fresh to each generation, and he greeted each new graduate as an old friend.

The Chancellor is ex officio the president of the annual meeting of the University Court, but previous Chancellors had usually delegated the job to a Pro-Chancellor. Jeremy was willing to do this himself, and he handled these large and sometimes difficult meetings with fairness and quiet authority. Awkward questions to the Vice-Chancellor were encouraged, but factious or irrelevant interventions were firmly set aside.

The new Chancellor asked for arrangements for him to visit the various academic and support departments, and these visits showed vividly his intellectual curiosity and his ability to take in new ideas. Academics who tried to explain their disciplines in lay terms suddenly found themselves skewered by a question that went straight to the heart of the matter. This was never done to show off or put down, but was motivated by genuine interest. Nor did he confine his questions to formal visits; at breakfast when he was staying in Stuart House the Vice-Chancellor would be asked, for instance, to explain the recent proof of Fermat’s Last Theorem.

The Chancellor has no formal role in the University’s decision-making, and Jeremy never tried to interfere, but behind the scenes his wisdom and experience were freely available. He would listen patiently to the latest plans and projects, asking pertinent and often penetrating questions. Often he would smile encouragingly and wish the University well. Sometimes however he would look worried, and on such occasions we learnt to go away and think again.

Sir Jeremy’s 14 years as Chancellor coincided with the University’s first systematic (and successful) attempt to raise significant sums of non-government money. He did not involve himself directly in the Campaign for Resource, and left the leadership of the campaign in the capable hands of Sir Michael Angus, but his advice in the background was of great value. He was aware of the danger that a university could, in seeking funds necessary for its success, lose sight of the scholarly purpose which alone justifies that success.

When the University invited him to be Chancellor, it knew much about him, but nothing about Lady Morse, and it was a most pleasant surprise when she first came to Bristol. Belinda, whom Jeremy had married in 1955, became a regular attender at University events, which she graced with friendly elegance. She showed a real interest in several of the University’s activities, especially the wonderful Theatre Collection in the Drama Department.

Sir Jeremy retired from the bank in 1993, but had many other activities apart from his Bristol role. Most notably he served for many years on the governing body of his old school, and was Warden of Winchester College from 1987 to 1997. There was an obvious tension between the affairs of a great public school and those of a university striving to broaden the social base of its student body. Jeremy looked at all the arguments with his usual clarity and rigour, and emphasised that both institutions were ultimately about the provision of the best possible education.

The writer Colin Dexter named his fictional detective Inspector Morse after Jeremy, and it has been said that he gave his character some of the attributes of his namesake, In fact, there is no resemblance apart from a sharp problem-solving mind, and it is impossible to imagine Jeremy getting up to the antics of his fictional counterpart. Jeremy was kind, courteous and punctilious, happy in the life of his family. His quiet certainty was softened by his shy smile and sense of fun.

The University of Bristol has been fortunate in its Chancellors, and certainly has cause to be grateful that it recruited Sir Jeremy Morse and enjoyed 14 years of his rule.

* For mathematical readers, the error was in the proof of Euclid’s famous characterisation of the even perfect numbers. The footnote is in G.H. Hardy & E.M. Wright, An Introduction to the Theory of Numbers, page 243 in the fourth (1960) edition.