Superhydrophobic coating protects without the price 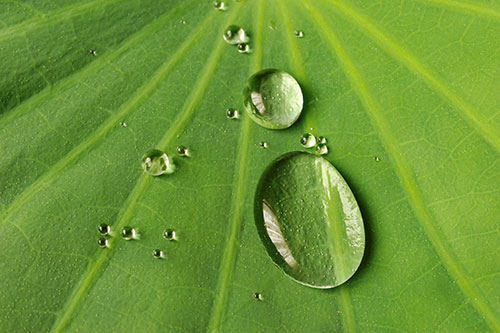 The researchers tried to mimic one of the most hydrophobic surfaces on the planet: the lotus leaf

A new class of superhydrophobic nanomaterials might simplify the process of protecting surfaces from water. Scientists in the US and UK, including Professor Julian Eastoe of the University of Bristol, have developed a water-repelling material that is inexpensive, nontoxic and can be applied to a variety of surfaces via spray- or spin-coating.

The hydrocarbon-based material may be a ‘green’ replacement for costly, hazardous fluorocarbons commonly used for superhydrophobic applications.

“Nature knows how to make these materials and stay environmentally friendly,” Professor Barron said. “Our job has been to figure out how and why, and to emulate that.”

The lotus leaf was very much on their minds as the researchers tried to mimic one of the most hydrophobic surfaces on the planet. The leaf’s abilities spring from its hierarchy of microscopic and nanoscale double structures.

“In the lotus leaf, these are due to papillae within the epidermis and epicuticular waxes on top,” Professor Barron said.  “In our material, there is a microstructure created by the agglomeration of alumina nanoparticles mimicking the papillae and the hyperbranched organic moieties simulating the effect of the epicuticular waxes.”

Fabrication and testing of what the researchers call a branched hydrocarbon low-surface energy material (LSEM) were carried out by Shirin Alexander (Swansea).  She coated easily synthesized aluminium oxide nanoparticles with modified carboxylic acids that feature highly branched hydrocarbon chains.  These spiky chains are the first line of defence against water, making the surface rough.  This roughness, a characteristic of hydrophobic materials, traps a layer of air and minimises contact between the surface and water droplets, which allows them to slide off.

The team’s LSEM, with an observed angle of about 155 degrees, is essentially equivalent to the best fluorocarbon-based superhydrophobic coatings.  Even with varied coating techniques and curing temperatures, the material retained its qualities, the researchers said.

Potential applications include friction-reducing coatings for marine applications where there is international agreement in trying to keep water safe from such potentially dangerous additives as fluorocarbons.

The team is now working to improve the material’s adhesion to various substrates, as well as looking at large-scale application to surfaces.